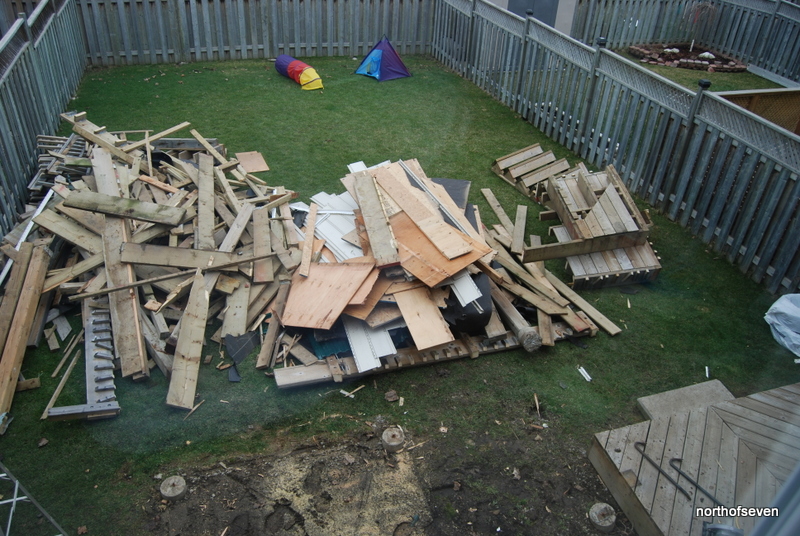 This post has taken way too long to write and given that it’s prime deck building season, it’s about time I wrote about the very first big reno that we did to the house.

I’ll try and let the pics do most of the talking.

When we bought the house and we knew the existing deck had to go. Not just because it was hogging up space and a poor design, but because it wasn’t up to code. Failed our home inspection with flying colours.

Initially when we were calling contractors we by fluke called Paul Lafrance‘s company Cutting Edge Design from the now very popular HGTV show Decked Out. This was before the pilot had even aired on TV and we were calling as a normal potential client to get a quote. Long story short, our budget didn’t allocate for a new deck design to appear on the show.

And that was just for Season 1. Never mind Season 2 which is more like ‘Pimp My Backyard’.

For the record, as a woman, I love seeing Kate Campbell on the crew. She’s inspirational to a lot of women, including myself, who seriously wishes shop class had been available to me when I was back in high school. Who knows if that would have taken me in a completely different career direction. It’s one of my goals to be able to learn to build – maybe not a deck – but small construction projects. Like a toy box or a bench.  She’s showing a lot of young girls they have more career choices than they may realize. So kudos.

Back to our deck.

Neither James or myself were about to build a second story deck without prior experience. I like DIY-ing, but not when it comes to things that my kids need to be able to walk on without me fearing it collapsing. So we began to work with my husband’s colleague who has a contracting company and he did the upper deck and stairs for us and James, brother-in-law and Father-in-law finished the bottom one.

First. Here they are.

THE  DECK – BEFORE SHOTS

The only thing holding up the stairs, was that wooden beam.

Let’s get on with it then.

Got the permit. Got the dumpster bin ready.

Then after all that was dragged up our stairs, into a dumpster bin, a funny – right, funny – thing happened. Notice how the photos are dark and dreary looking?

That’s because it started to rain.

Then it really rained.

From Mid-May to Mid-June.

With maybe 2 sunny days to get the concrete posts in. Only to learn the home builder cheaped out and didn’t put in weeping tile and the concrete posts wouldn’t harden because of the rain and pooling water. So. A nice little additional expense of getting that in.

We felt terrible for our contractor because this pushed back a lot of his deck projects as it was supposed to be a very quick turnaround time.

Which it was. Once the sun came out.

When it did, this happened.

Then we added the bottom deck several months later.

Then moved the bbq and furniture around.

And finally added the small side 4 x6  Jardin shed from Home Depot next to it.

This is it currently.

I don’t think we had a single dinner indoors the entire summer after it was finished. I’m telling you, people in the suburbs do not take proper advantage of their backyards. Not sure why.

I hope maybe we can inspire you otherwise.