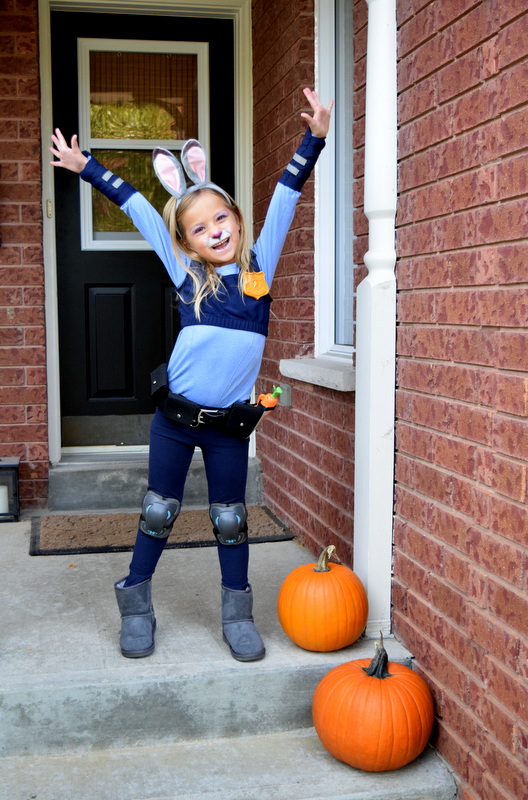 You ready? I am going to do my best to teach you how to make a DIY Judy Hopps Costume for all those Zootopia fans in your life. Now. My husband and I have this inside joke that our kids are solely responsible for Zootopia’s billion dollar box office revenue. For almost two months straight they watched the movie at home every night when it came out on DVD. They have every single line memorized and have reenacted that sloth drivers license office scene to perfection. As of the time I am writing this Zootopia is currently the 2nd highest grossing film of 2016.

So you would think there would be a giant amount of Zootopia toys and products everywhere. But there isn’t. And I can’t for the life of me figure out why. It is a great movie with a great message and I feel like every adult should watch it, never mind just kids. Only recently have I seen the costumes start appearing in stores. And in the history of Halloween costumes, they sort of look like the movie costumes, yet not quite.

To be very fair before I get into this post, if you are not crafty or have zero desire to make any Halloween costume, Dazcos sells a very good Judy Hopps costume on Amazon. It is however not cheap. But again, it’s really great, so if you’ve got the income and want to save yourself some time, get that one.

If you’re me, one look at my Halloween Project Gallery will tell you, if I can make it at home or less, I will find a way. Even if it takes me hours (it takes me hours).

Once our younger daughter decided to be Officer Judy Hopps for Halloween (Disney characters seem to be a big theme in this house) it was like ok, what can I do to make this costume when most of the parts are not available in store and I can’t use a sewing machine.

So this is the Officer Judy Hopps costume we came up with. 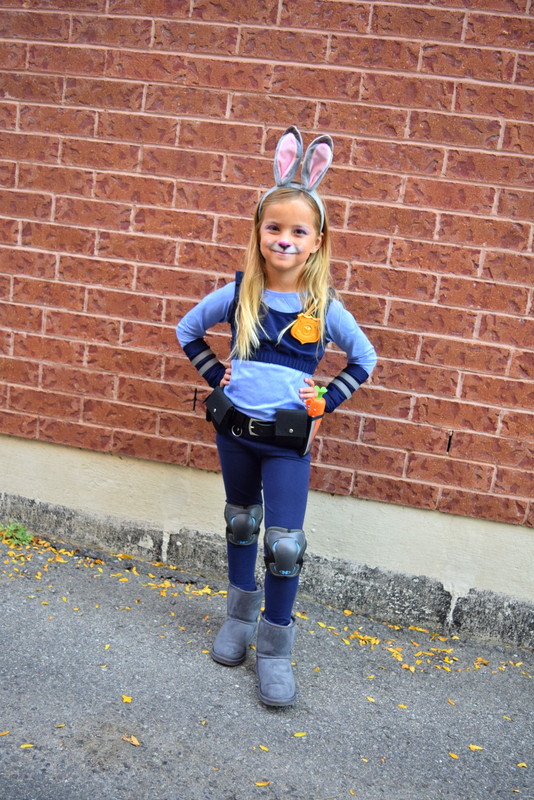 This is what we used to make the costume, which included some of our daily worn clothing mixed in with new props.

I apologize for the terrible photos of the some of the process and products I took to make this. I honestly did most of the hand stitching on my bed or on my kitchen table late at night and remembered to pull out my phone at the last minute

The two biggest challenges were the vest and the belt. Standard kid Police costume vests don’t look anything like Judy’s does in the movie. What does? A sports bra. In order to modify it for a kid size, I found the smallest one I could in a navy colour and then sewed the top straps down. 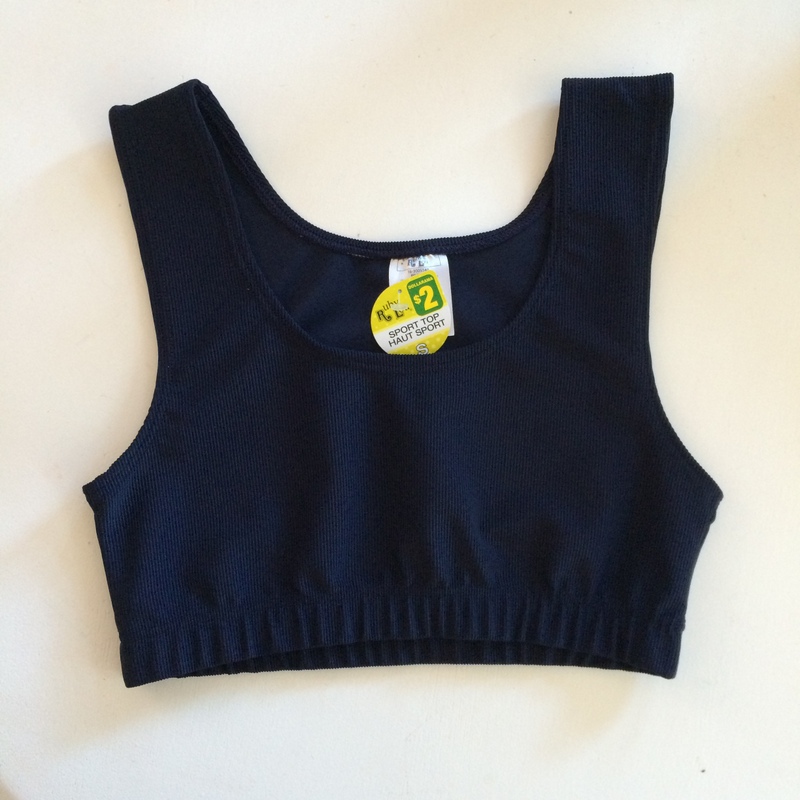 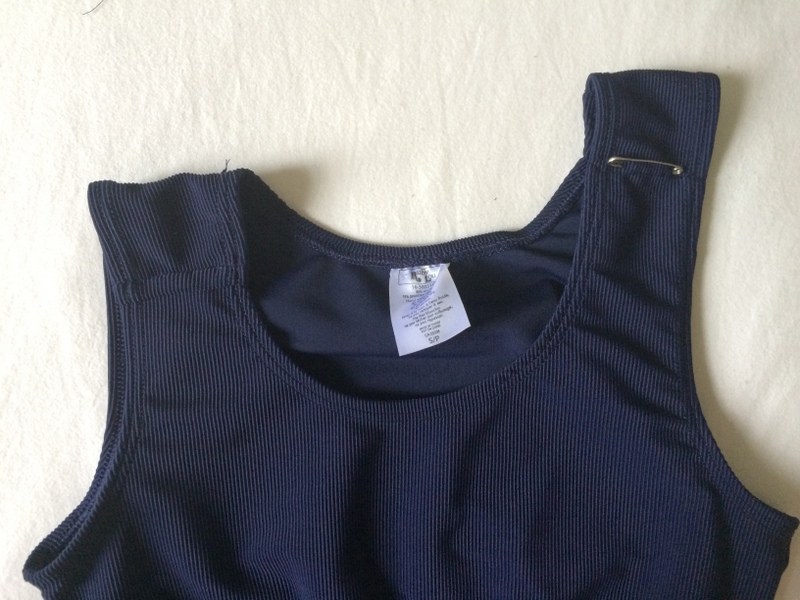 I then took the other sports bra (I bought 2) and made the cuffs out of them. Normal people would – and should – just get a pair of navy socks or cut off the ends of navy leggings and use that as your wrist cuffs. Me? I had to make sure her vest matched her cuffs.

Which in real life would probably be made out of a tough nylon or neoprene material but we won’t get into that or my detail orientated self will not sleep at night. 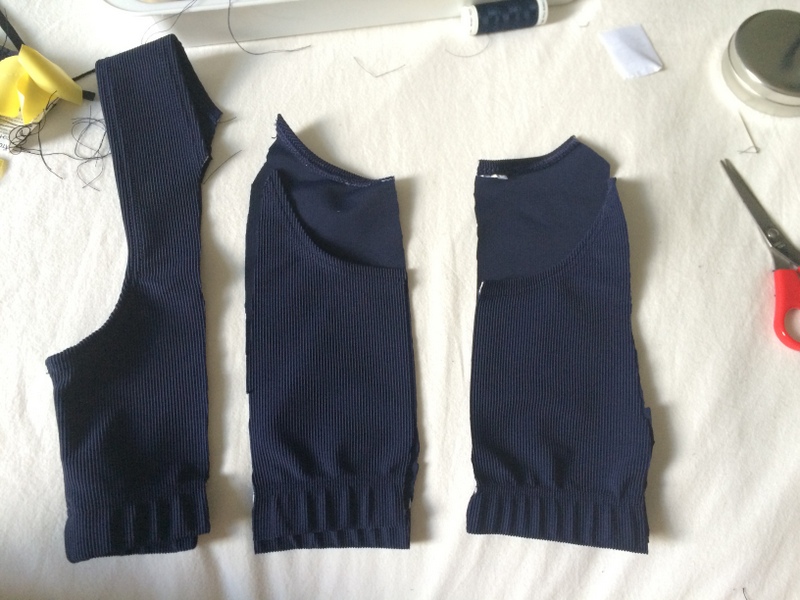 Then I took these neoprene dog mittens and cut them up and restitched them into pockets/holders for her belt. 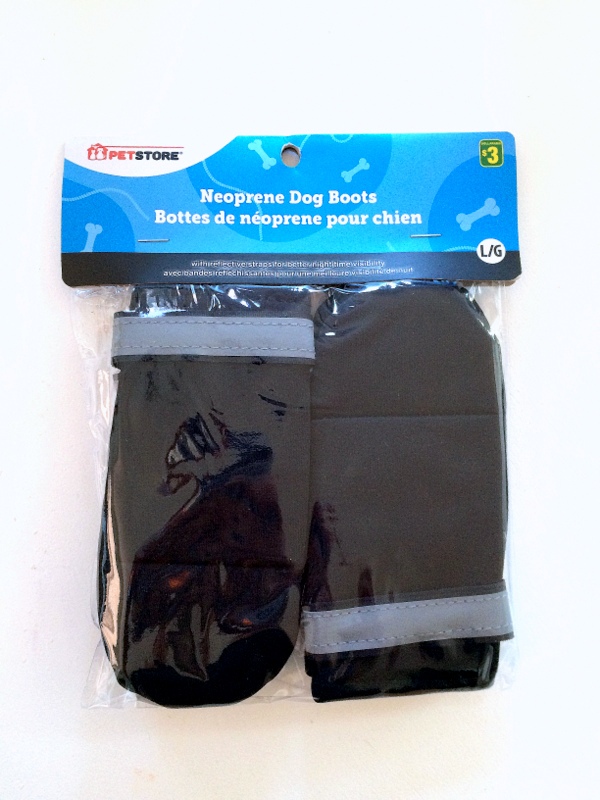 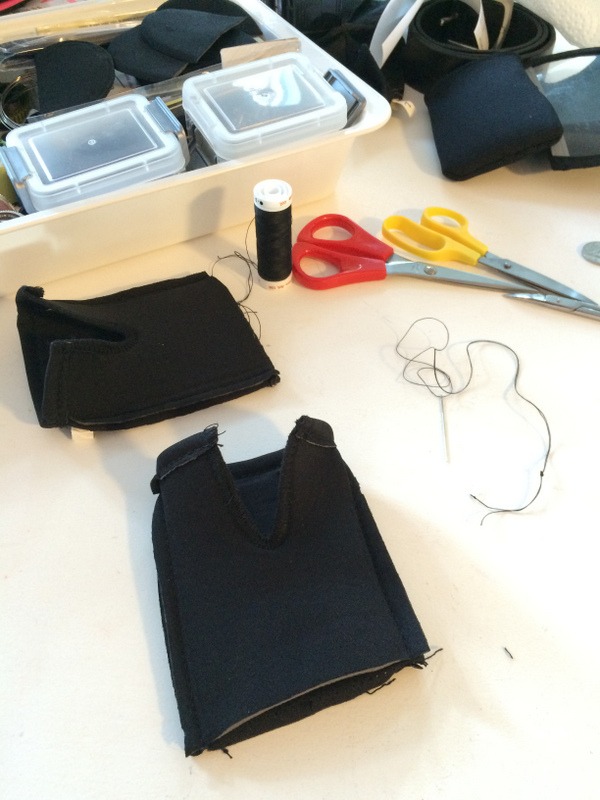 I used felt for the flaps and rivets to piece them together. I also stitched tags on the back of them after they were done so the belt could slide through them. The iPhone cell phone holder that holds the carrot pen (or the walkie talkie – she wanted the carrot pen in there, who am I to argue), is just an arm cuff band with the wrap around arm parts cut off. We trimmed the men’s black belt to fit her hips.

The silver lining strips from the dog boots I used for the silver stripes on her wrist cuffs.

Finally I  found these knee pads that coincidentally had the letter H on them, for Hopps of course!  All of this was from Dollarama. 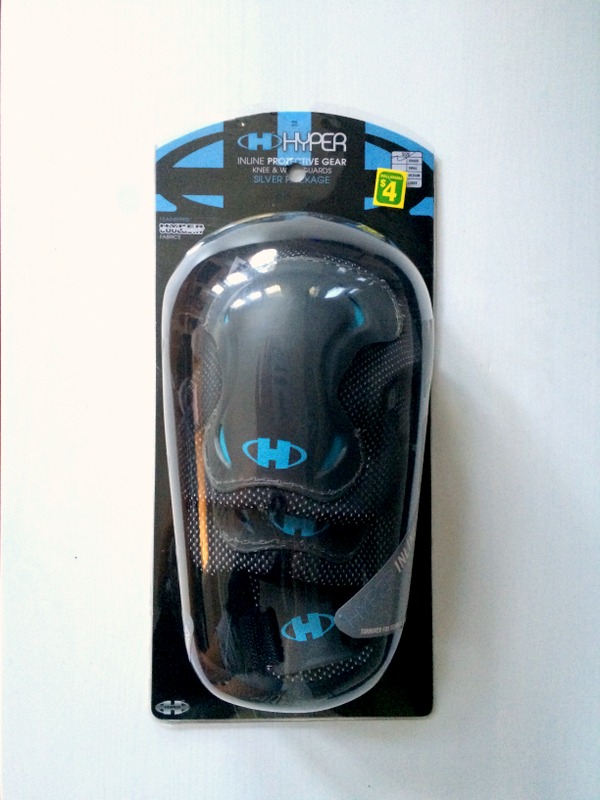 This is what the belt looked like put together. I added a small key ring with a piece of felt looping around the belt. 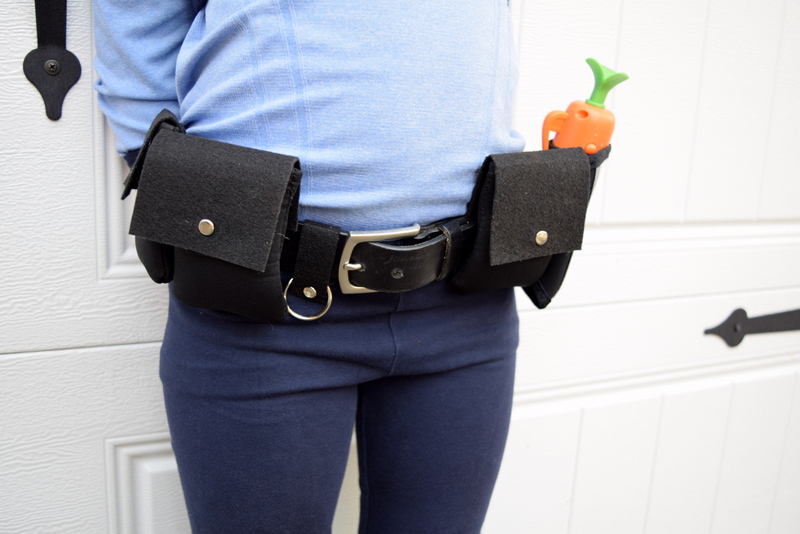 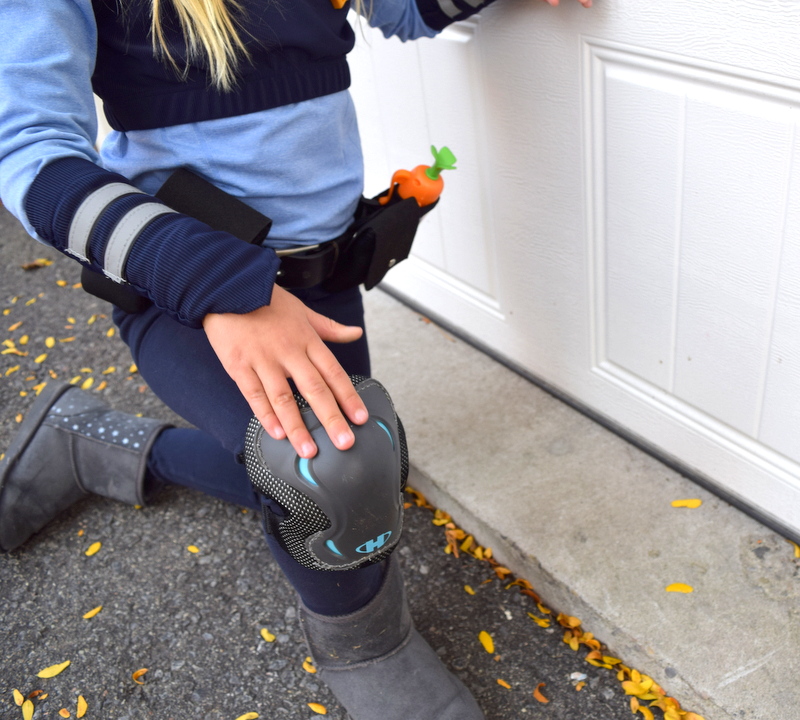 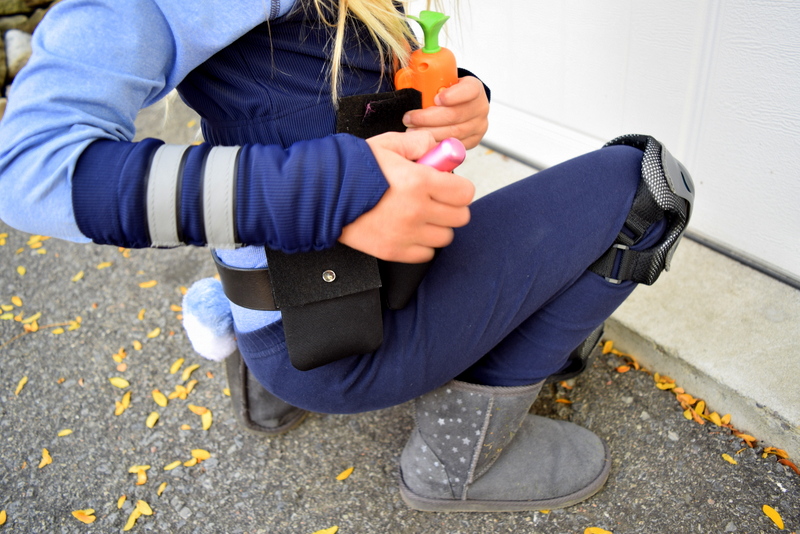 The Fox Spray is awesome. And I can’t show it to you because I don’t have the rights to use the image of the Fox Repellent spray from the movie. It really looks cute. But it’s one thing for her to use personally in her own play time but it’s a very different thing if I showed it on here. So if you want to see a great one done up to get a better idea, visit this Cosplayers page. Incredible!!!

And I can’t forget the tail.

I couldn’t find a grey rabbit tail anywhere. So I bought a regular white Halloween bunny costume tail, dug out a grey crayola marker and then just coloured the tail into her shape. 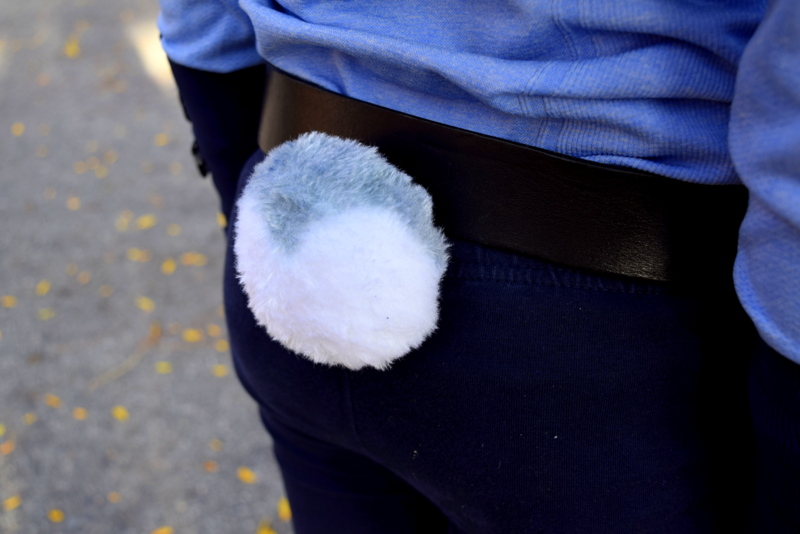 And now we have a happy – seriously happy and hoppy – Judy Hopps. 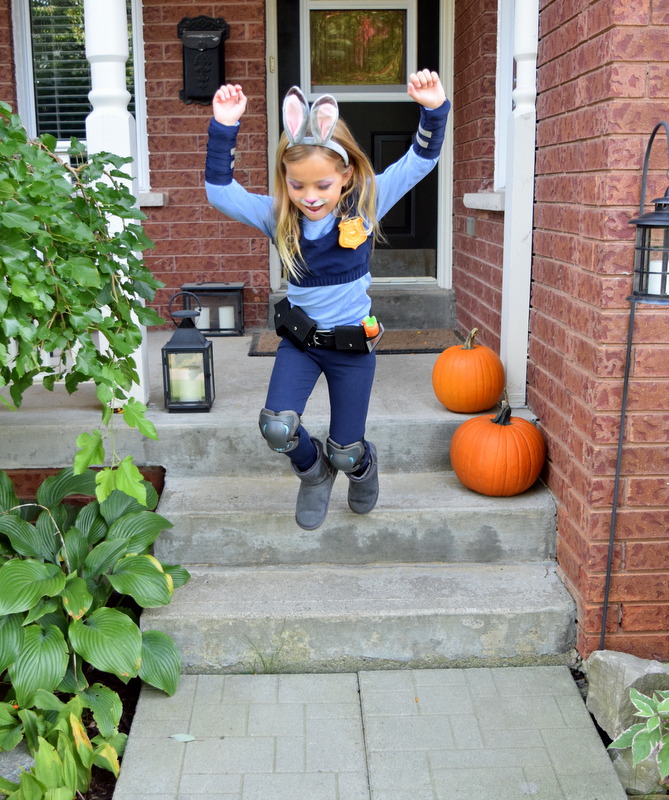 Just a couple of quick things to note:

1) If you read the reviews of the rabbit ears, you will read that they flop down and don’t stand up very well on their own. This is true. I had to just put two small stitches in the backs of the ears to get them to stand up as they don’t have a wire in them. It’s an easy fix. So don’t be dissuaded from getting them.

2) The badge in the carrot recorder kit is a clip on badge. In order to get it to hang on the front of the sports bra, I pinned a safety pin to the sports bra and then clipped the badge over it. Then you need to put a piece of duct tape at the bottom open clip part or during excessive jumping it can fall off. The carrot recorder is awesome. It really works and she loves it! From Pink Darth Vader….

I can’t wait to see what she picks next year.