I still remember the time when my older daughter ran up to a woman at the mall and told her how much she loved the pattern on her shoes. And then as the woman bent down to say thank you to her, she said how nicely they matched her belt. They were leopard print heels and the belt was a taupe one that was specifically selected to match the shoes.

My daughter was then barely 2 years old.

For as long as I can remember she has seen design, fashion, texture and patterns far beyond anyone her age, let alone my age. To her planning her daily outfit is an event. I have absolutely no doubt (despite her being very good at science and math) that she will most likely gravitate towards some creative field as a career choice.

Needless to say Halloween is a very big deal in this house.

This year both my daughters, who seem to enjoy matching their costumes each year (we’ll see how long that lasts), were supposed to go as Elsa and Anna from Frozen. Then we went to see the movie Maleficent and there was absolutely no way that was going to happen. As soon as L saw Angelina Jolie it was like the rainbows and unicorns parted the skies and there was absolutely nothing else that was going to cut it. Including the store bought versions of the Maleficent costume – which in the tradition of most store bought girls Halloween costumes, looked nothing like the film character.

If one costume wasn’t too short and skimpy, the other was too poofy and shiny. Bottom line was there was Angelina in the christening scene in the black leather choker and movie poster collar and that is exactly what she envisioned as her costume.

Now if you haven’t met me before, myself and the elusive sewing machine are not friends. It takes me hours just to thread a bobbin. Hand sewing I can do a lot better but you know.

So I tried to do what I do best and that’s find costumes that I can modify to create another costume very much like I did with the Evil Queen from Snow White she wore when she was 5. That way it’s easier and less time consuming. And does not involve me threading a bobbin.

This is how our Maleficent costume turned out this year. In order to get this costume, here is all that I did.

The dress is actually a generic black gown/robe costume made by a company named Gemmy. I picked it up at Value Village. Then I cut off the hood part and left enough material to tuck it under the dress. You can stitch this down if you’d like but if you leave enough fabric you won’t need to (the cape will cover it anyway). The picture shows it has a front upper chest liner but this one didn’t have it for some reason.

It’s long. It’s a gown. And even the details for a child’s costume look much more complimentary to Angelina’s dress compared to the Maleficent costumes in the stores. If you don’t make a cape you could easily add the collar to this dress on its own.

If you can’t find that one above, Amazon sells this one and it almost identical and will do the job just as well. 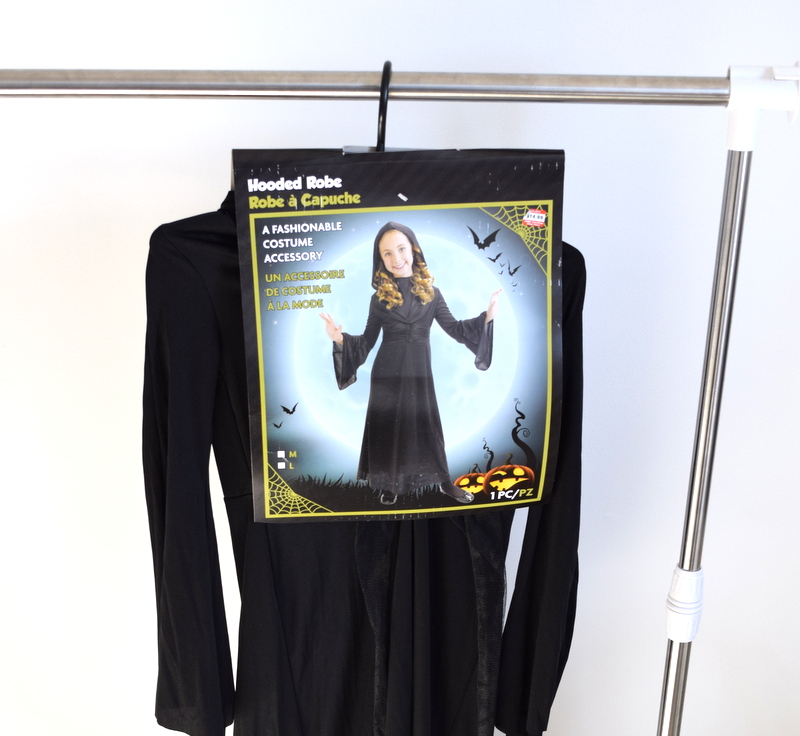 Maleficent in this movie version (vs the original Sleeping Beauty Maleficent) doesn’t technically have a cape for this particular costume. But we live in Canada and it gets cold here during trick or treating. Besides, what kid doesn’t want the chance to wear a cape once in awhile. The cape itself is an adult sized velvet cape that on an adult would go to about the knees. You can buy these at any costume store/Halloween section.

The collar very much like the Evil Queen costume was the only major DIY of this costume. And it took me THREE tries just to sort out a good prototype for it as we needed a collar that you could form into a wave style and yet not weigh a ton to fall down. So let my trial and error make your life easier when you go and make yours.

First with the cape on my daughter, I measured the base of her shoulders and cut out 4 triangles to correspond with her measurements. This is important because if you make them too big it will mess up the outfit, not sit right and fall off your child’s shoulders.

Then I took the DYMO tape and attached it to the edges of the collar triangles as shown below. After I took duct tape and covered only the side with the DYMO tape with duct tape. Initially I used the duct tape all around but it really weighed down the collar. When I did it only on one side, it helped immensely.

The DYMO aluminum tape I found worked far better than regular wire (I tried a prototype with regular wire first and it bombed). It’s flat so it doesn’t show through like normal wire would in a costume and you can still bend it to a wavy pattern of your choice. Regular DYMO tape won’t work. You  need the aluminum version.

I then attached the two collared parts to each other at the base of the collar only (as there are two collar parts in Angelina’s costume that are layered on top of each other) and used – wait for it – my glue gun and glued the newly joined, now “one piece” collar to the inside of the cape. Can I tell you out of everything I was surprised that she did not want the headpiece as part of the costume. But she did want the horns. Instead of making these we bought a pair of the Maleficent Glow Horns from Amazon and I would just like to state that if you can, order these out of season as they go up in price the closer you get to Halloween. You can flick a switch on them to have the lights stay on all the time.

If you want to make your own horns, one of my favourite tutorials is from As the Bunny Hops and for the full headpiece check out this great tutorial on Instructables.

5) The Choker and the Jewel (neck piece)

That was another thrift store find. It was a faux leather belt with 2 rings at the buckles (you know the ones that were huge in the 80’s) and I just trimmed it to her neck size and attached the ends with stick on velcro tabs. The belt originally was from the store Ardene’s and it’s definitely not from the actual 80’s as the price tag was still attached.

As for the gem stone jewel on the dress, that was also from Ardene’s – necklace pendant I just stitched into the dress.

As for the staff, you can find the DIY for that here. The crow I just attached with some electrical tape.

Most important, the imaginary Maleficent is very happy with her costume. 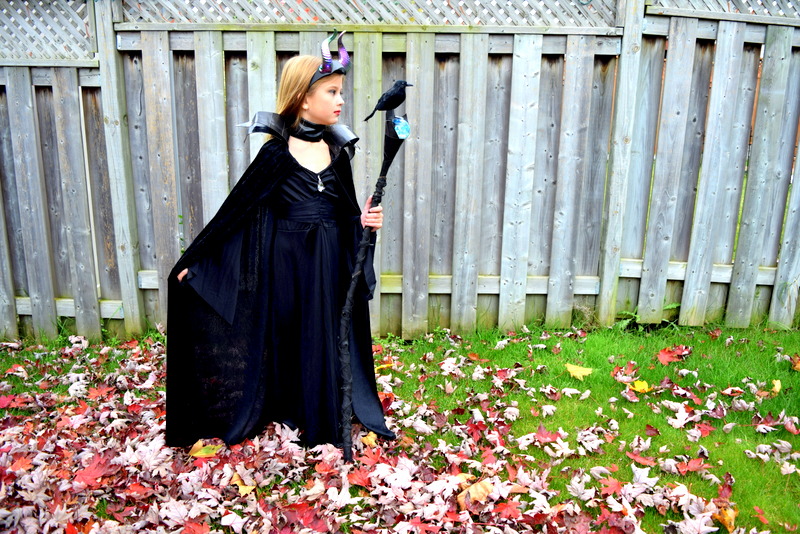 Now if you’ll excuse me, I have a Princess Aurora leaf coronation crown to go spray paint gold.

PS – Want to see how both Maleficent and Princess Aurora turned out on Halloween night? Click here for the costume reveals.