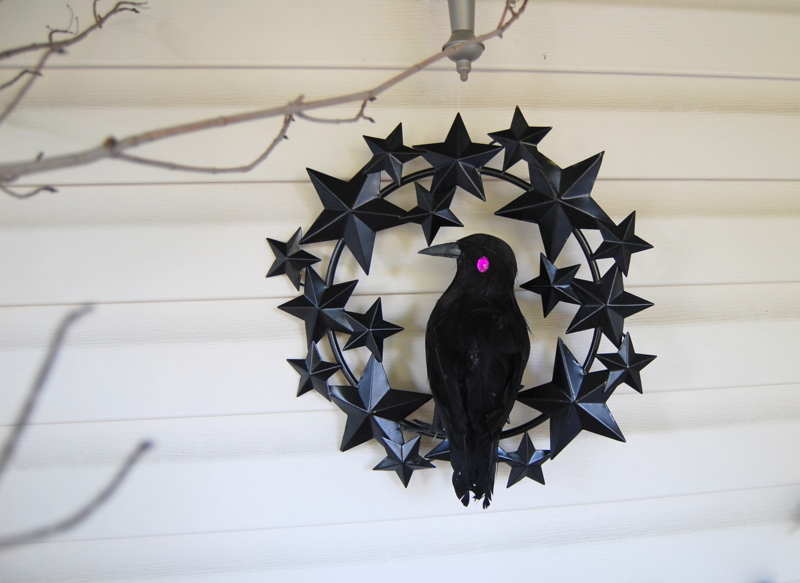 We were in Walmart this month and I needed to get food colouring. The food colouring is sold in the same aisle as the magazines. While in that aisle looking for Wilton Orange Icing, my daughter decided to pick up a magazine to browse through. Above all magazines on the shelf she picked up Country Living‘s Halloween Decoration issue.

And above all pages she turned to it had to be this image of a cascade of bats across a front door. If you haven’t seen it, you haven’t been on Pinterest where it’s been pinned about 10000 times.

“Mommy can we decorate our door like that this year?”

“Yes dear I’ll cut out 100 bats for you and duct tape them to our walls”. That was my outside voice too.

Ok. Felt – which is what they recommend to make them with – here in Canada isn’t cheap. Let me re-phrase that. It isn’t cheap to me per quantity of bats that I needed to cut out. So I picked up a roll of craft foam at our local dollar store where I could get 74″ (just over 6 feet) for $1.25. And then began to cut out bats (I used chalk to make the outline on the foam sheets that I folded in half which made it way easier to cut out each bat).

Foam is great for two reasons. A) It’s waterproof and B) It’s reusable, meaning after you take your bats down, you can re-use them again next year so you don’t have to cut them out all over again.

Mind you if you have a blog doing last years Halloween decorations again on your blog the following year, may not be that enticing for your readers. Says the one who is copying one of the top Halloween DIY pins on Pinterest. When both grown women and a 5 year olds think it’s cool, you know you’ve made a hell of a great DIY.  So kudos Country Living. 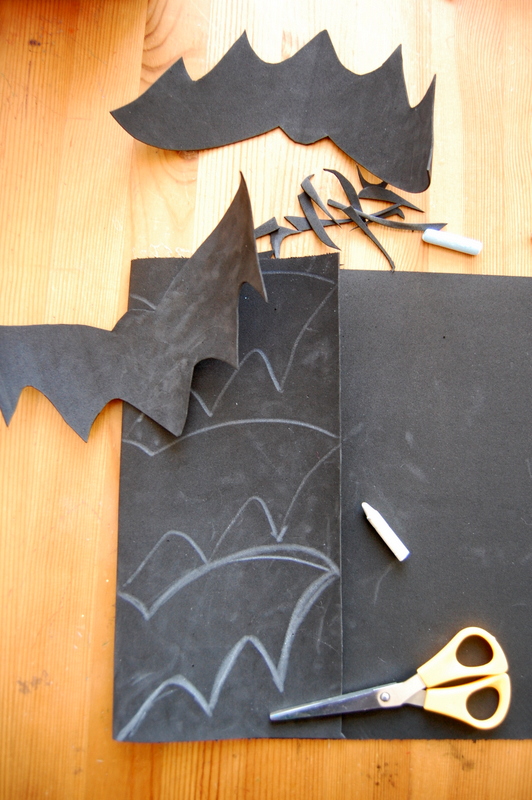 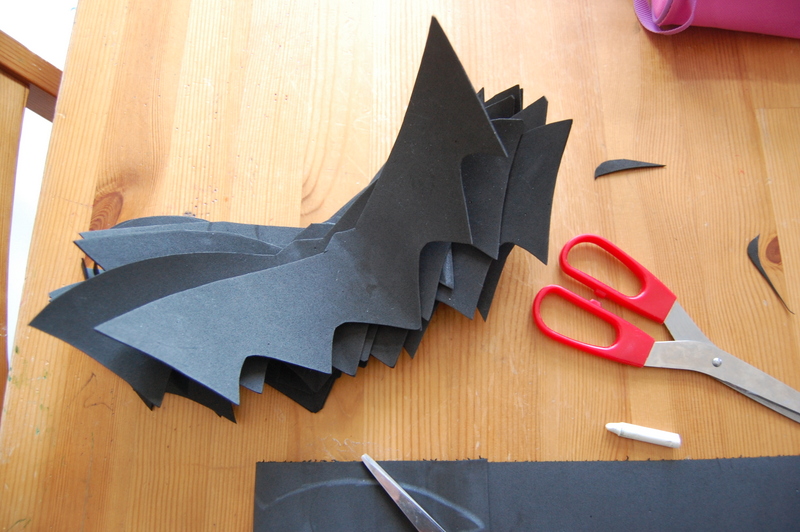 I made three different bat sizes. If I can give you one word of advice after doing this, make more smaller sized bats and less bigger sized bats. When you build your swarm of bats, you want your big bats to be the focal point surrounded by the smaller ones. I wound up trimming a lot of the bigger bats.

In the meantime during the week that I was making the bats I came across a dead tree branch on the side of an empty road I drive on everyday. After a week it was taunting me. So it came home with me. 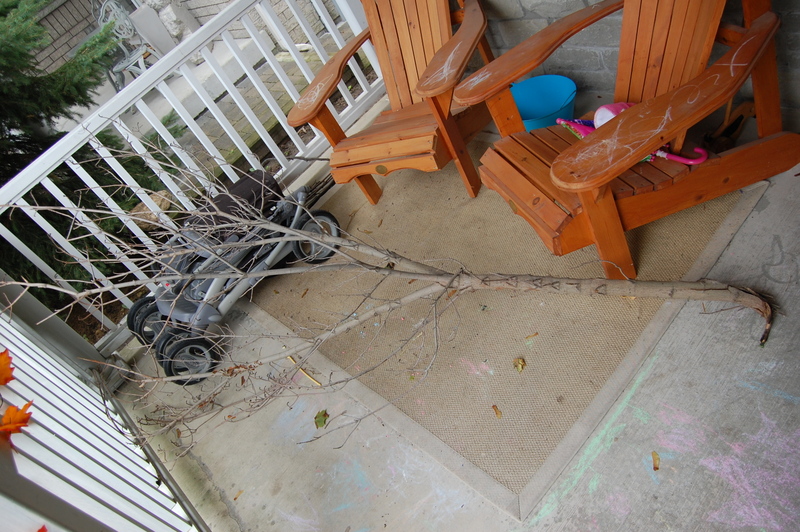 Then I also found two metal star wreaths at the thrift store that I thought could use a good update.

If you’re a fan of taupe or beige, turn away now (and don’t worry I have an extra that I am saving for Christmas that I am going to paint Candy Apple Red to make you cry even more). 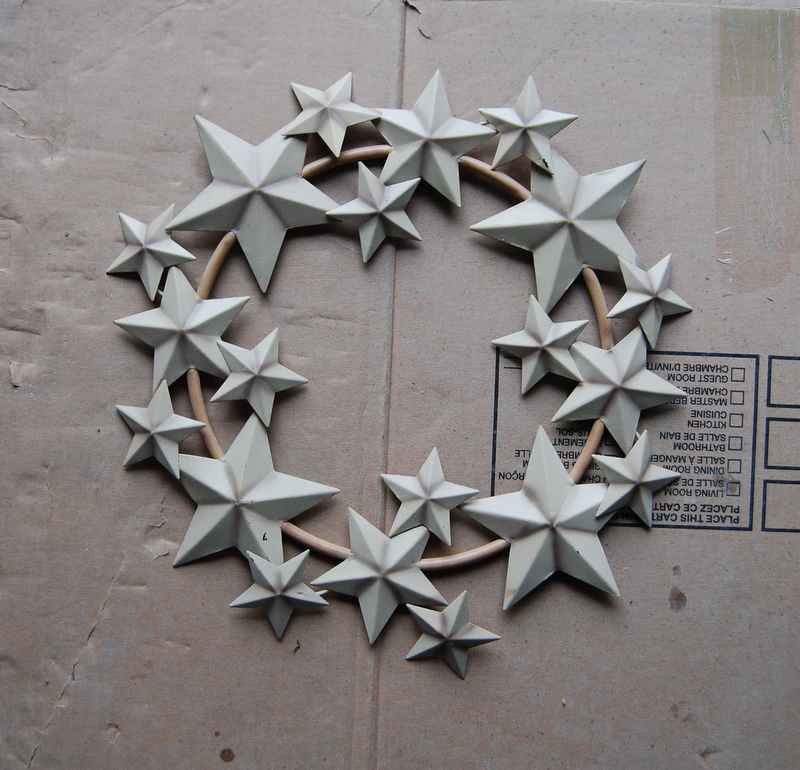 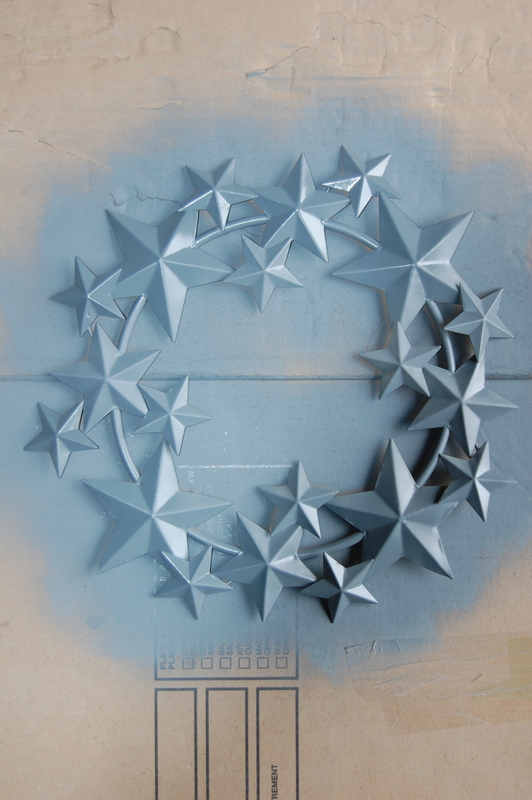 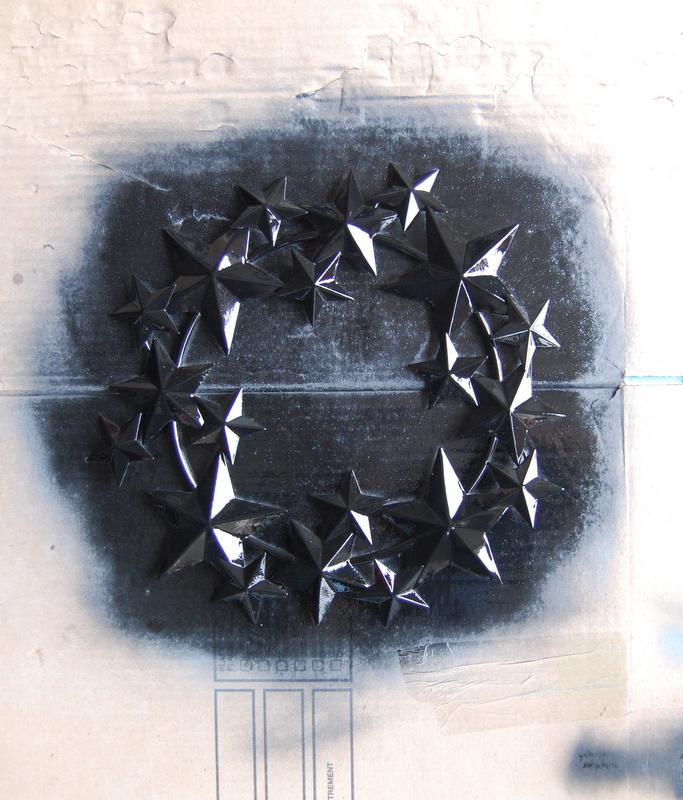 And it all kind of came together like this. 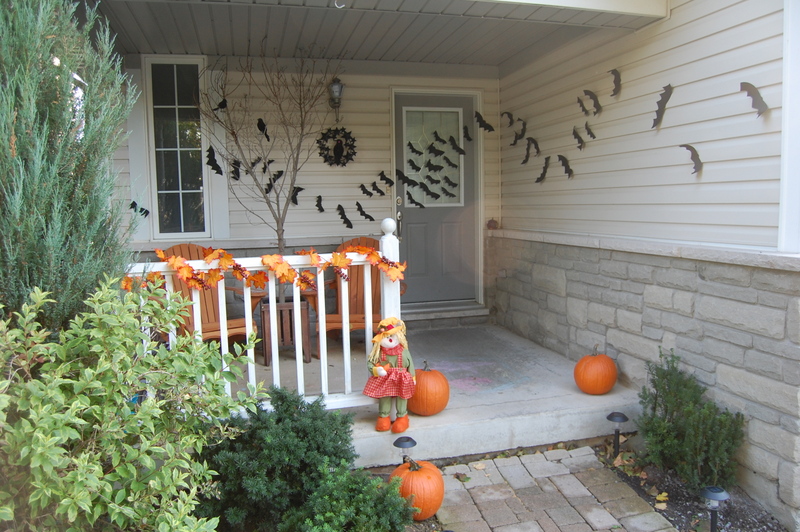 But something was still missing for me.

For one the bat wings were flopping around. I tried to justify it to myself by saying “Oh they look like they’re flying”  but that ended pretty fast the more the bat wings curled into each other – the foam started resembling bat balls and not bats. So I went back and re-taped them on properly so their wings were flat on the siding.

And then I thought what good are scary bats, black crows and tree branches if they’re not in the shadow of a full moon.

So I made a moon. 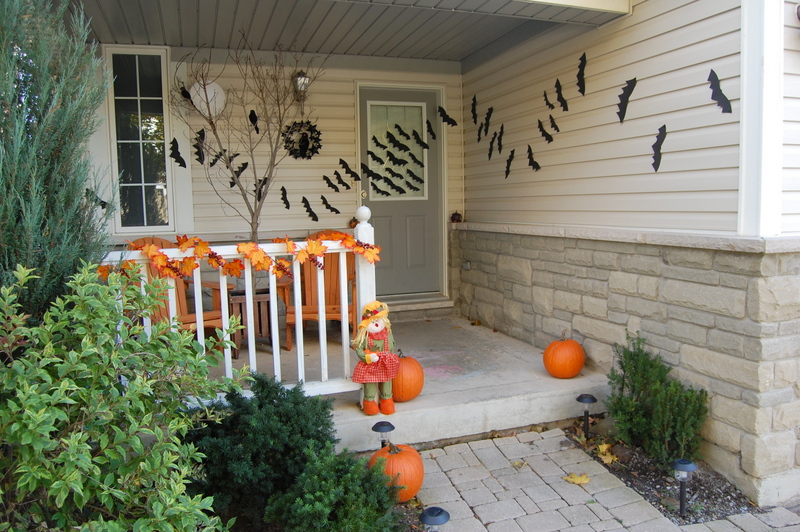 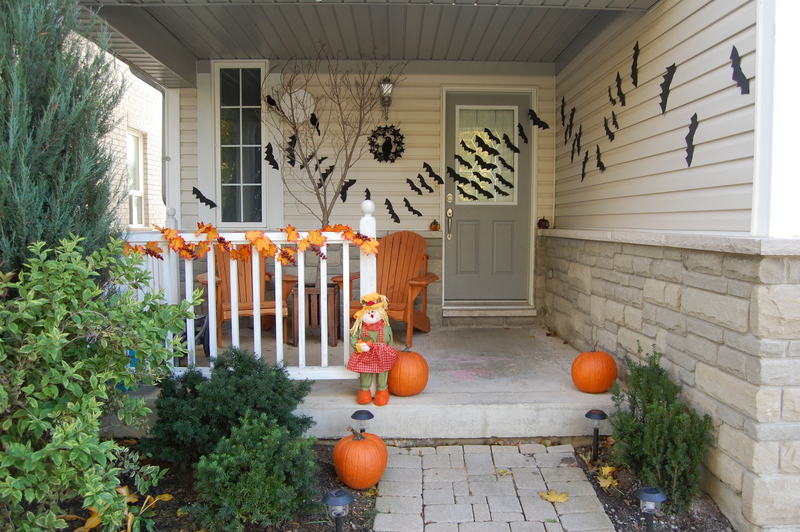 And then waited until it got darker to take a photo of it lit up. 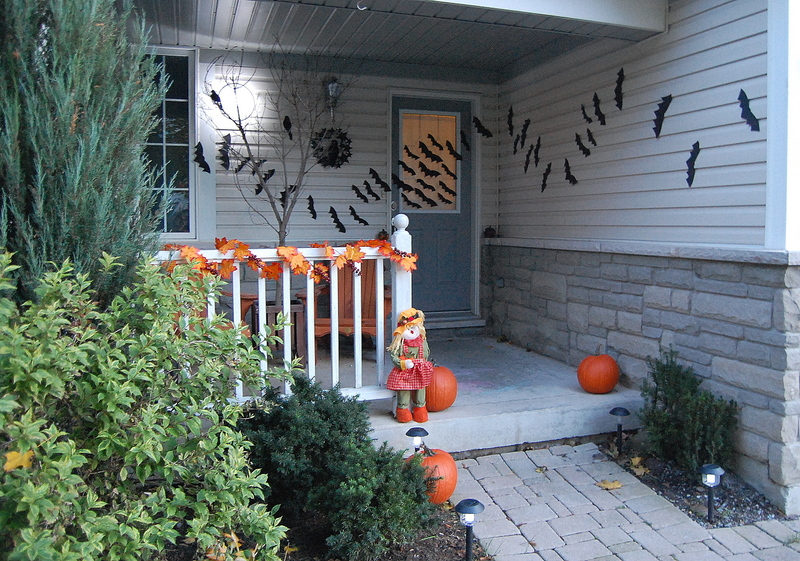 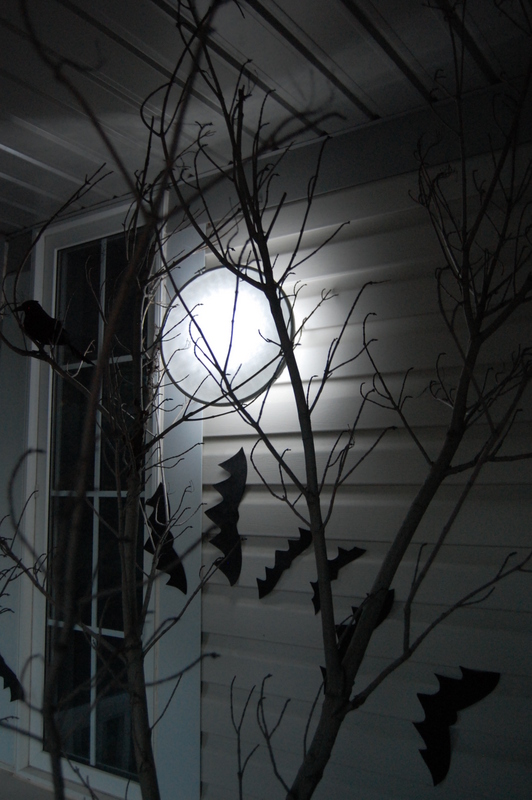 The moon was ridiculously easy to make and yet the effect looked really cool in real life. I just hoping to get some glow out of it but it actually wound up doing a really did a great job of lighting up the entire porch, especially when it got really dark at night and brought out all the shadows from the tree branches. I am going to take some photos of it all on Halloween night if I can remember to drag out my tripod before I get swarmed by trick or treaters.

All I did was take an embroidery hoop (I have dozens in my basement from thrift stores), painted it white, put in a white pillowcase, trimmed it to size and hung it off the tree with fishing line. Behind the embroidery hoop, I put up one of those stick on LED touch lights that you can buy for your closet similar to this one only I got mine at the dollar store for a $1. 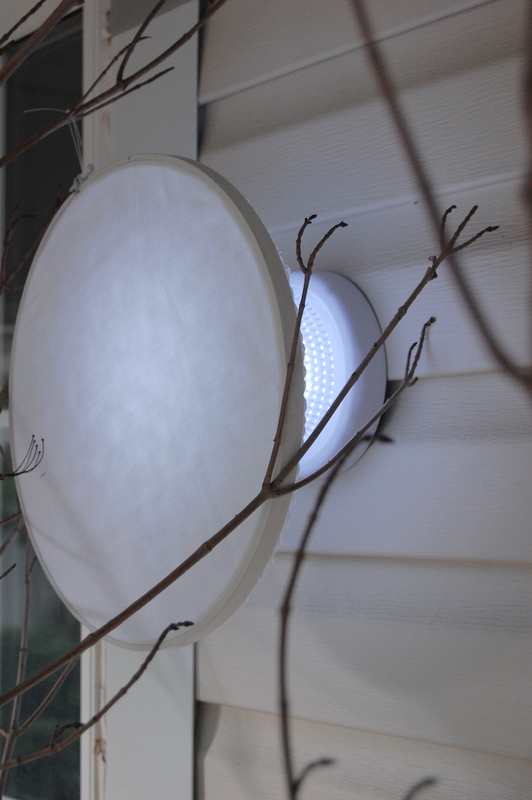 And you get yourself a pretty kick ass full moon.

You know what this porch really needs?

Some PicMonkey Halloween effects that get them to feel a little more Edgar Allan Poe era-esque with letterbox. Everything looks better when it’s letterboxed and 16:9. 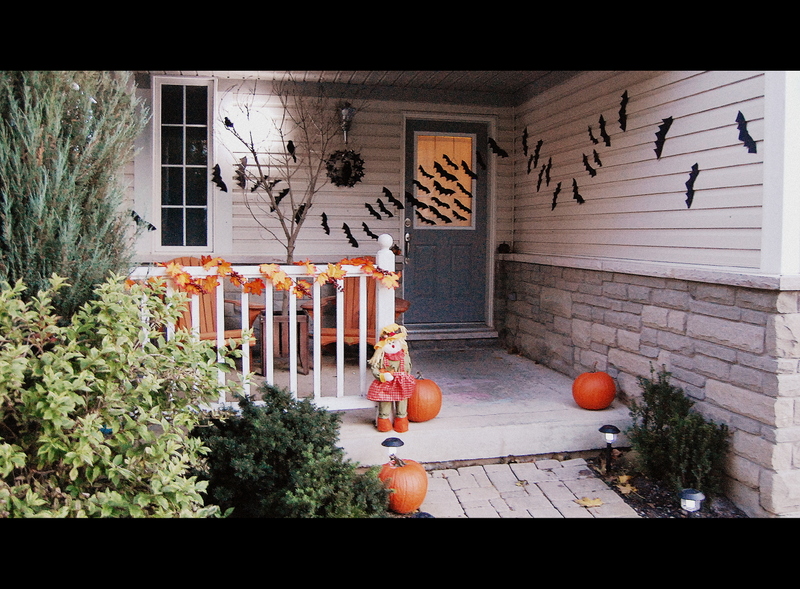 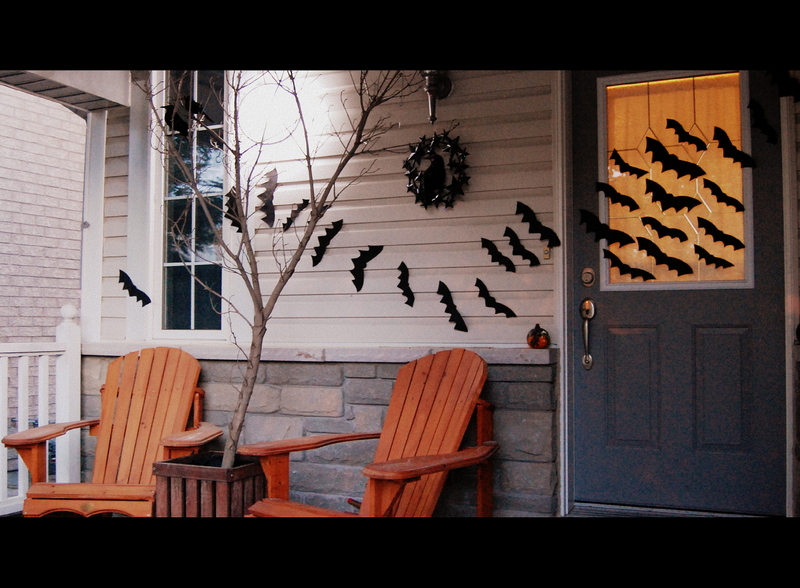 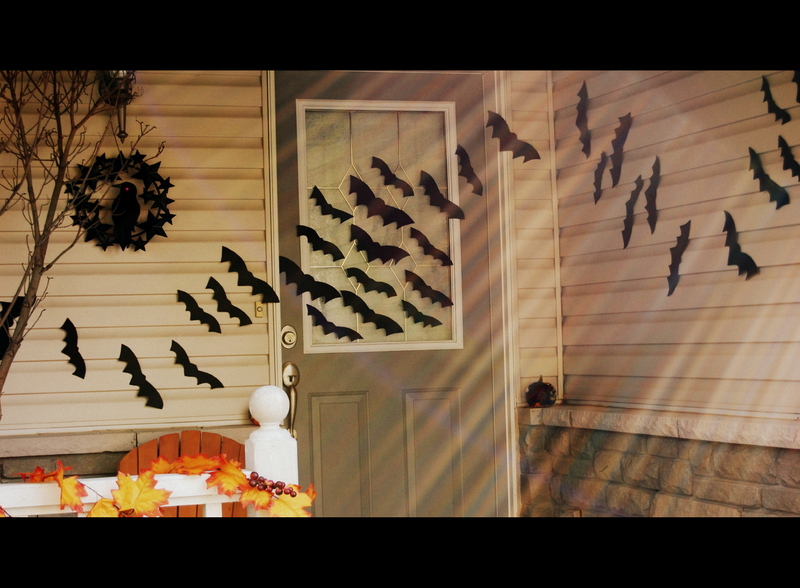 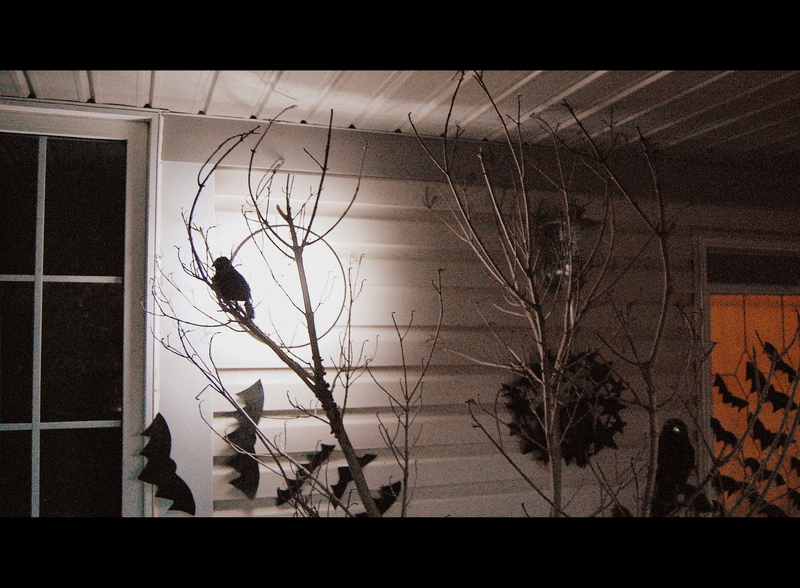 That and a lot of mason jars with tea lights, some lit up pumpkins and a couple of hundred trick or treaters. That’s not a typo. Get your candy this week ladies and gentlemen. Last year we almost ran out.

Welcome to suburbia. The only place where your Halloween decorations will cost you less than the candy that you will give out.

On a side note, wait til I get my hands on that tree branch for Christmas decorating. 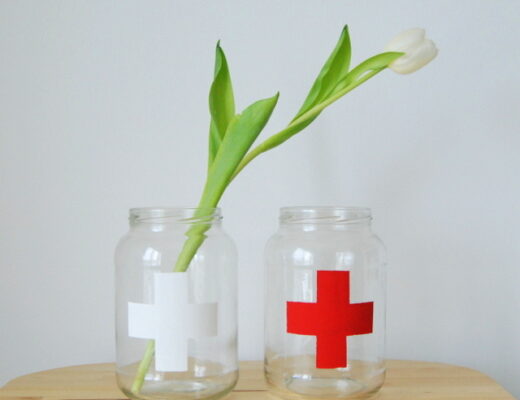 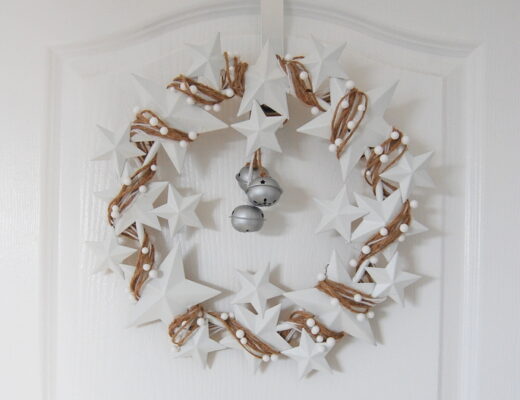 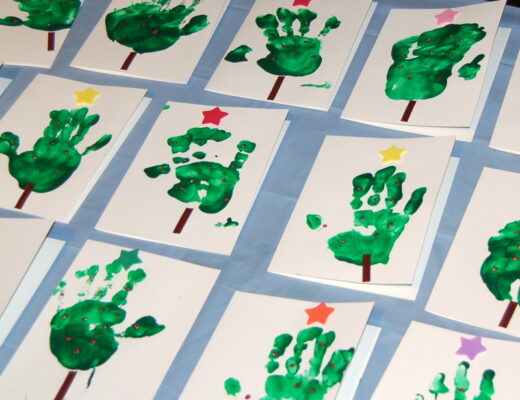