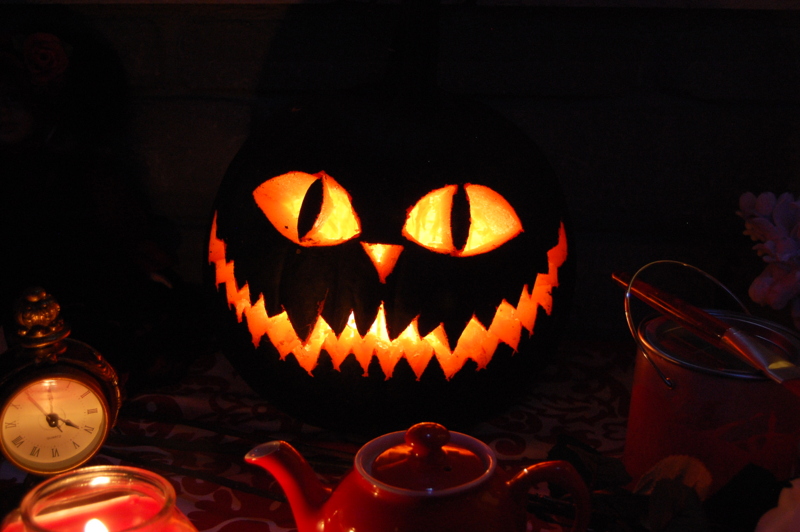 A Little Bit of a Gothic Wonderland

Oh Hello. My  name is Alex and I am just now recovering from Halloween.

You may or may not have notice I missed a northstory notes edition on Friday. That is because on Thursday I spent the night with ghosts, tons of candy, glow sticks and some lovely Shiraz. All to feign ignorance to the fact that Mother Nature decided to invade our pocket of the world with freezing cold almost November rain and high speed winds which made for the shortest trick or treating session on the planet. I think we had *maybe* 50 kids come to our door. In a subdivision where just 2 years ago, I couldn’t close my door for almost 3 hours.

I had this particular idea for our Halloween front porch decor for this year since my older daughter decided she wanted to be the Queen of Hearts for Halloween last Fall. First she wanted to be Dorothy from the Wizard of Oz but then too many viewings of Tim Burton’s version of Wonderland led to a fascination with “Off with their heads!”. First the Evil Queen from Snow White, now this. Hmm…

Anyhow, Alice in Wonderland overall is one of the best fairy tales ever to let your imagination go to the darker spectrum of things – which is probably why there are so many gothic interpretations of it.

So I present to you, our Gothic Halloween front porch for Halloween, inspired by the Queen of Hearts and Alice in Wonderland.

How this all started was that I basically dragged my husband and my kids to a mini forest (read: park) and we took home a whole bunch of old branches that had already broken off of their respective trees. Then after we dragged them home to the perplexed look of our neighbours, I then covered them with fake roses and tied them to our porch with fishing line.

The black chandelier was an old cheap chandelier from a thrift store that I painted black. Which for the record was a spray paint disaster (think bubbled up paint) but because it was for Halloween it added to the creepy, old effect. I then added some gothic decorations, skulls and you can never go wrong with bird cages and crows. 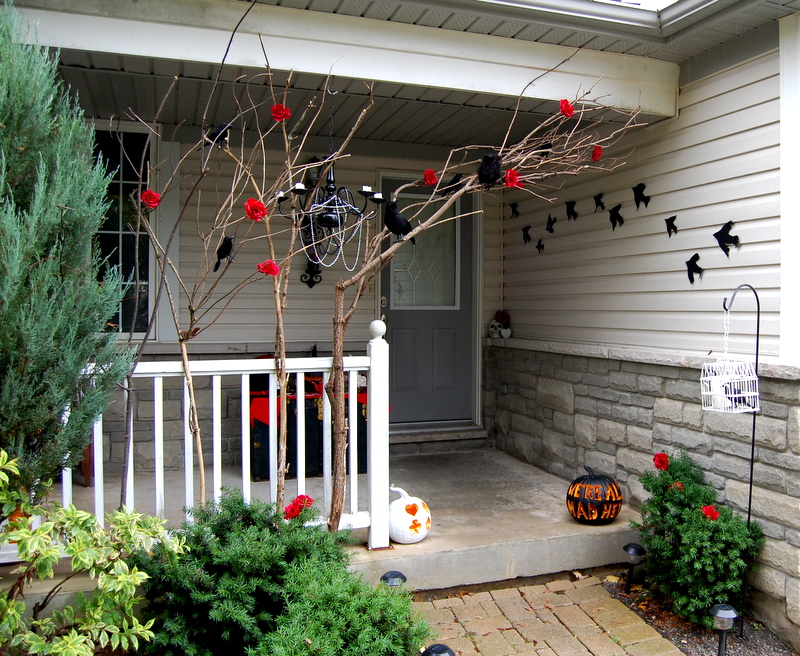 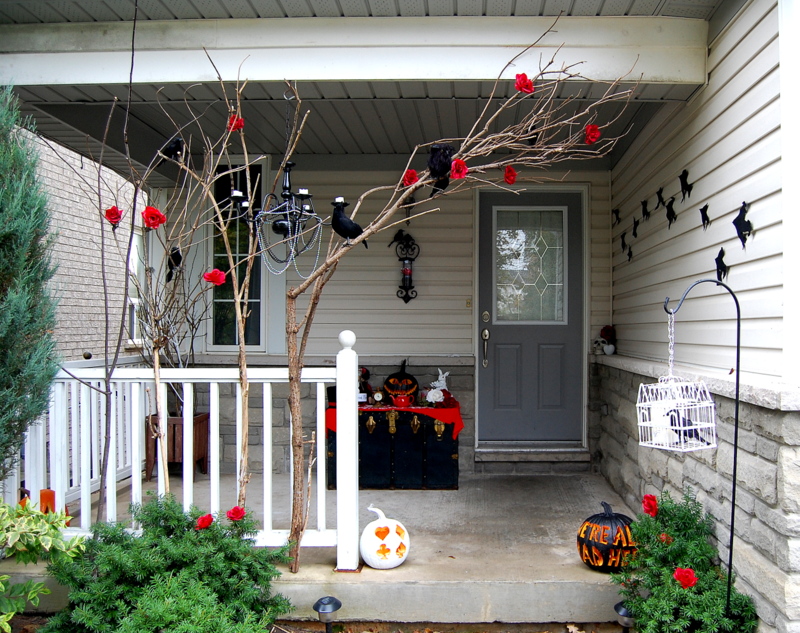 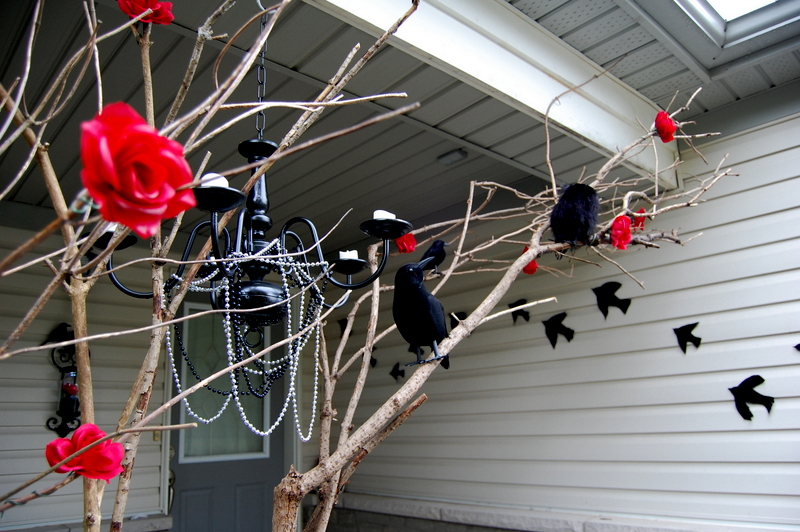 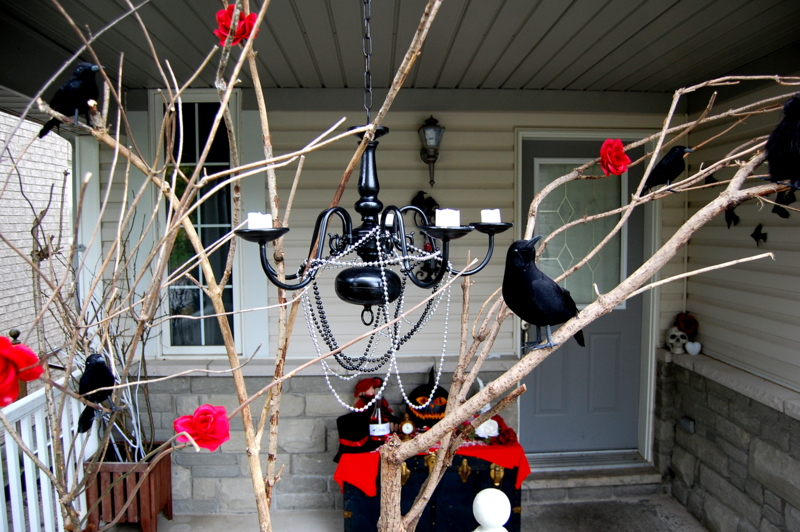 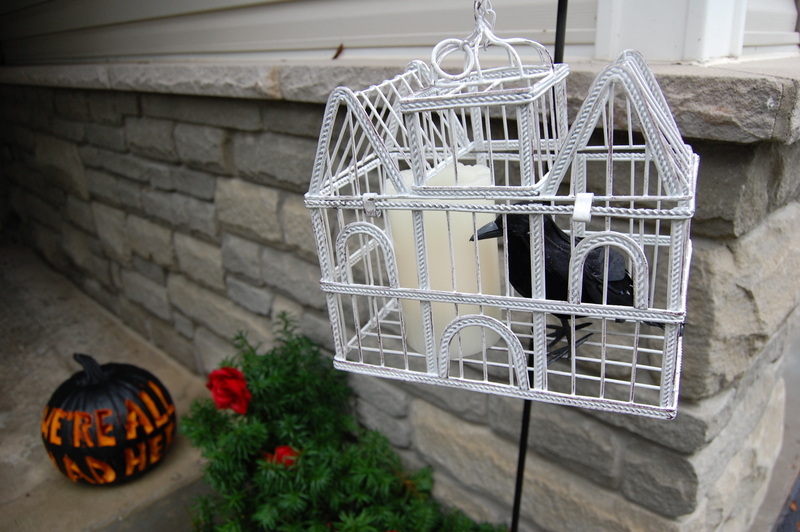 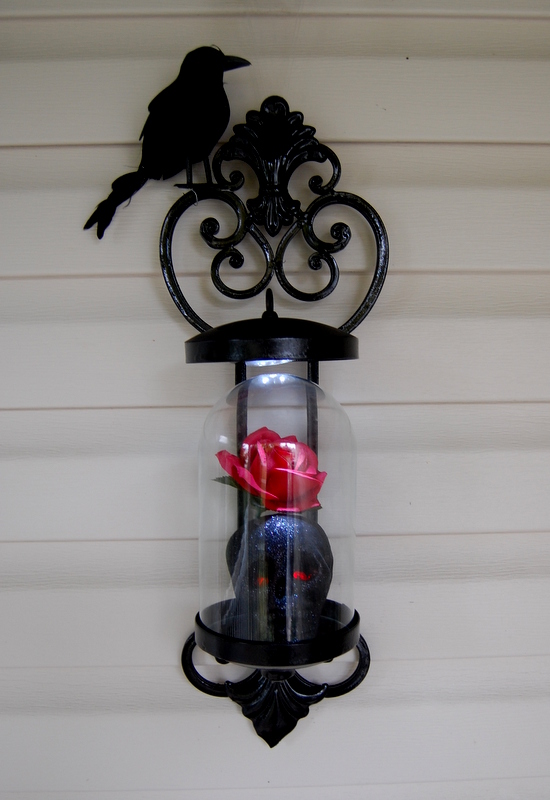 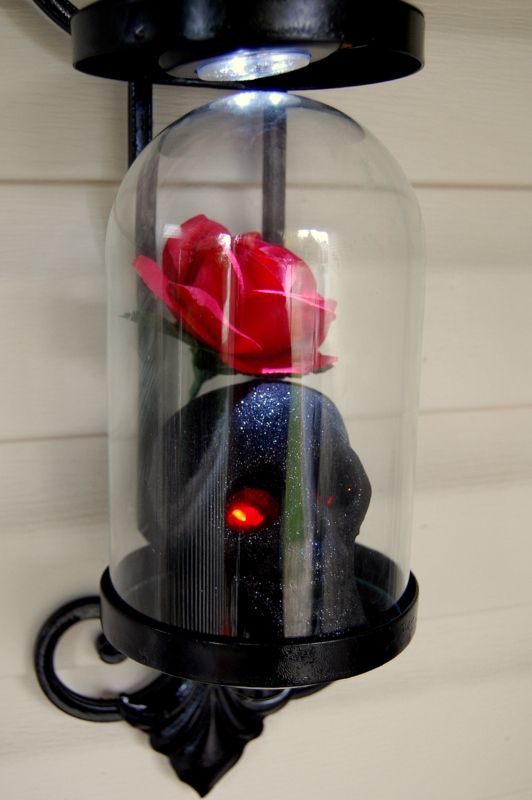 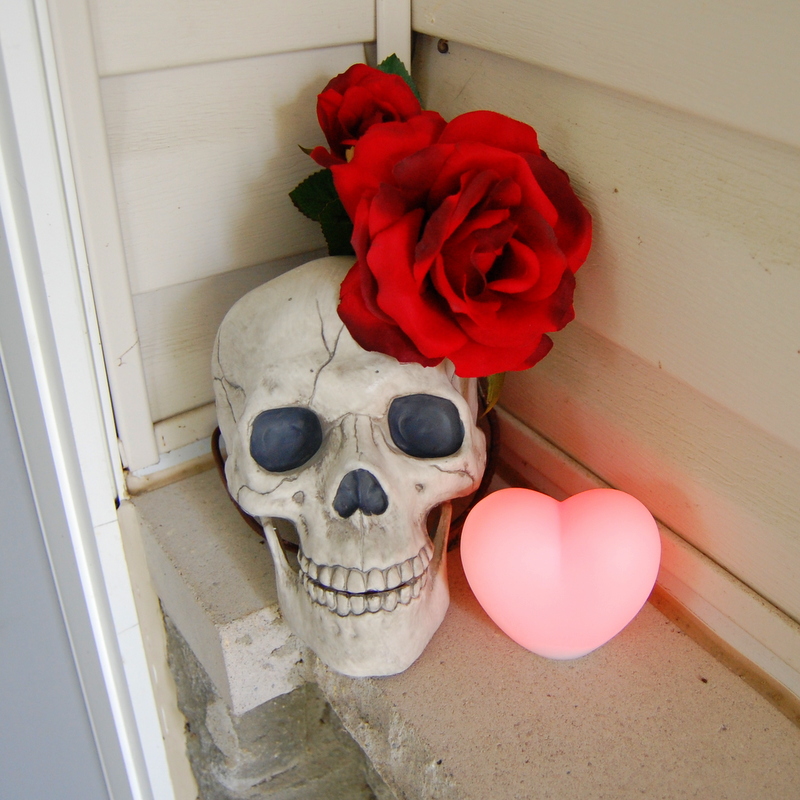 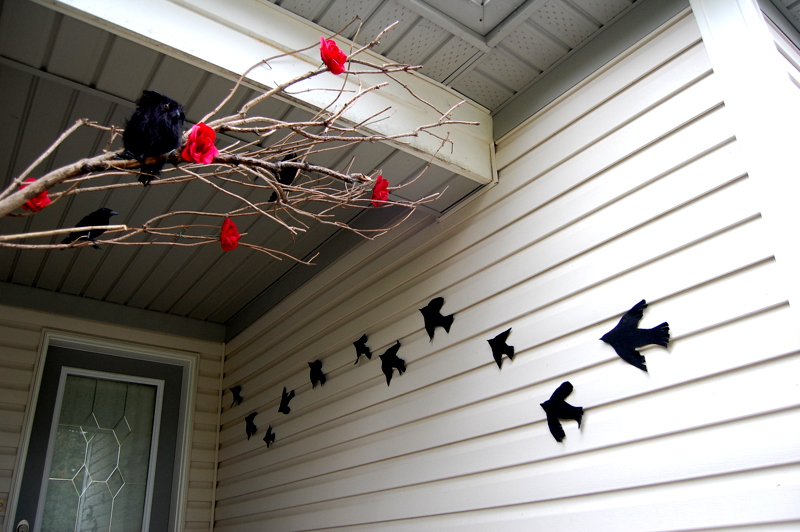 Then on my Kijiji score of a vintage black steamer trunk (whose hinges are broken and who I haven’t been able to find a spot for in our home) I did an Alice in Wonderland Vignette using a variety of symbols from the story.

You’ve got the white rabbit, a Gothic looking Alice doll, the Cheshire cat Jack O’ Lantern, a teapot, painting the roses for red for her majesty the Queen of Hearts, the Mad Hatter’s hat, a clock and of course something to drink. The fabric under it is leftover red velvet from my daughter’s Queen of Hearts cape and a piece of fabric that we got as a sample at BlogPodium from Tonic Living. 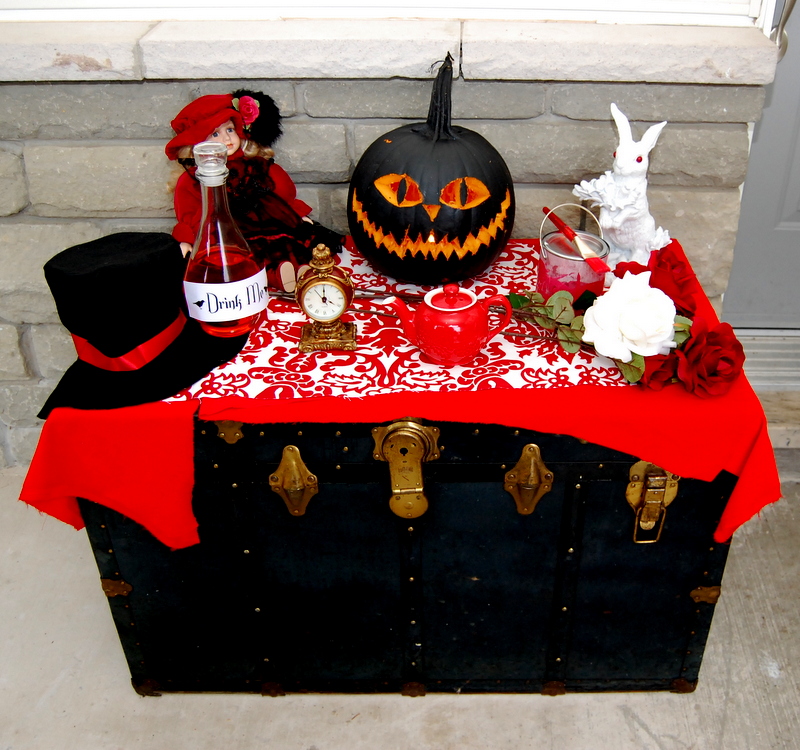 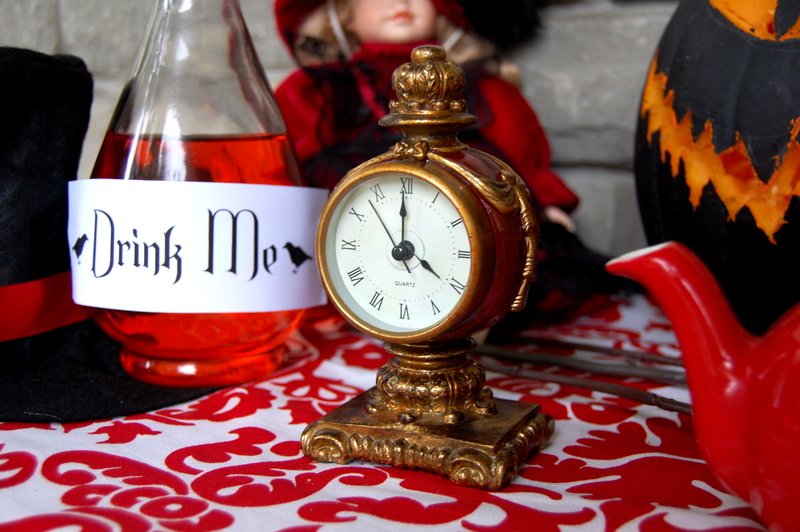 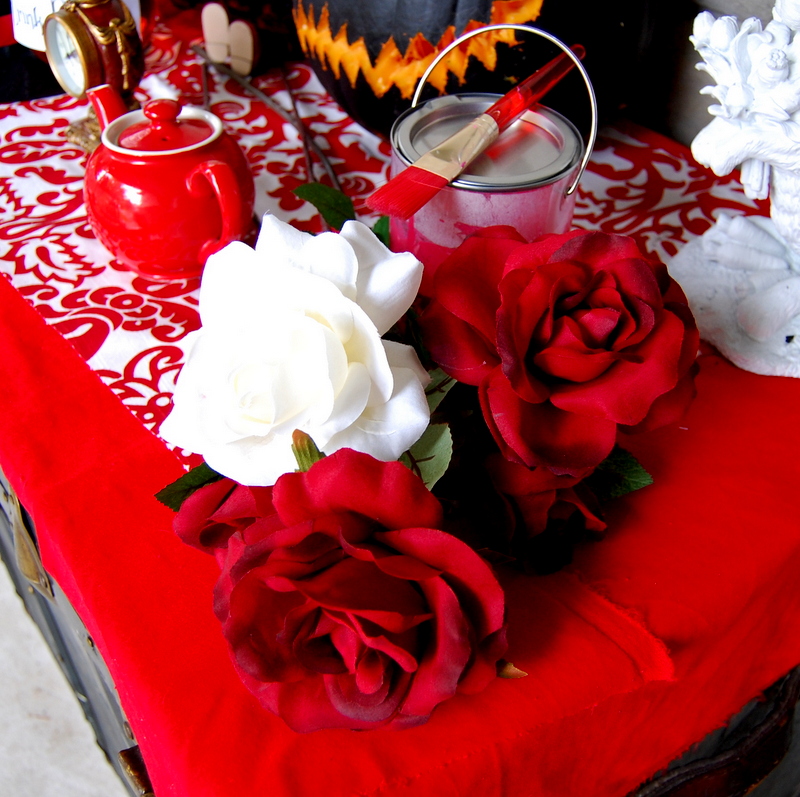 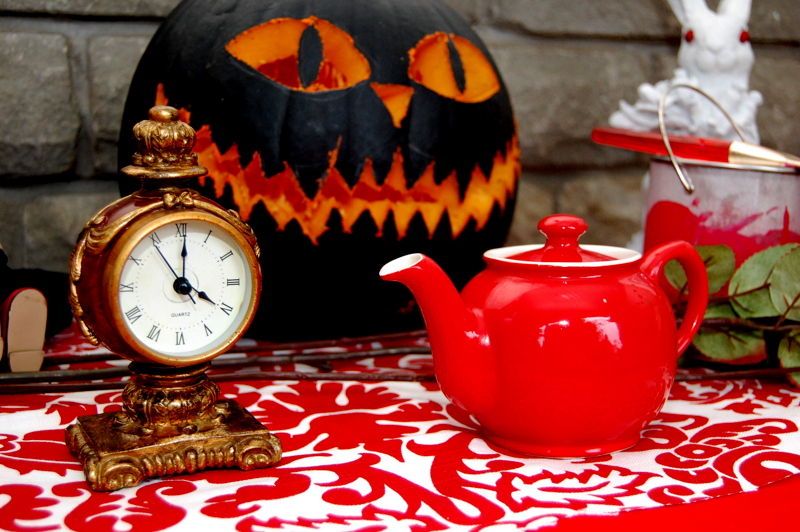 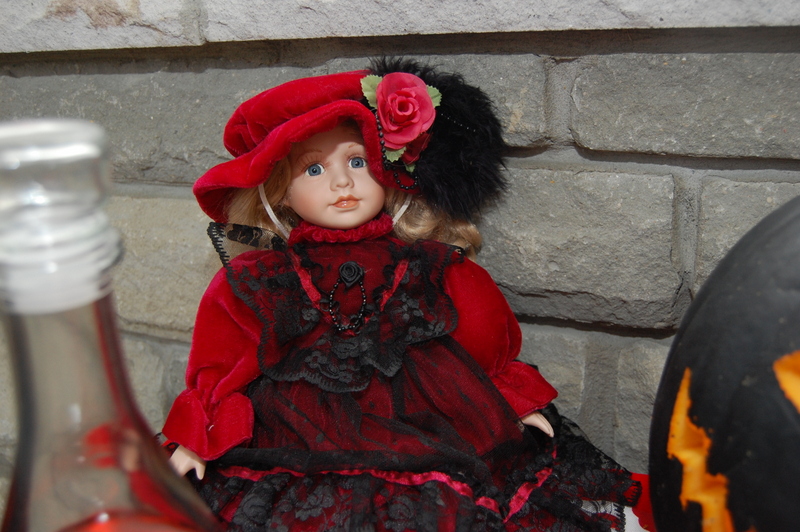 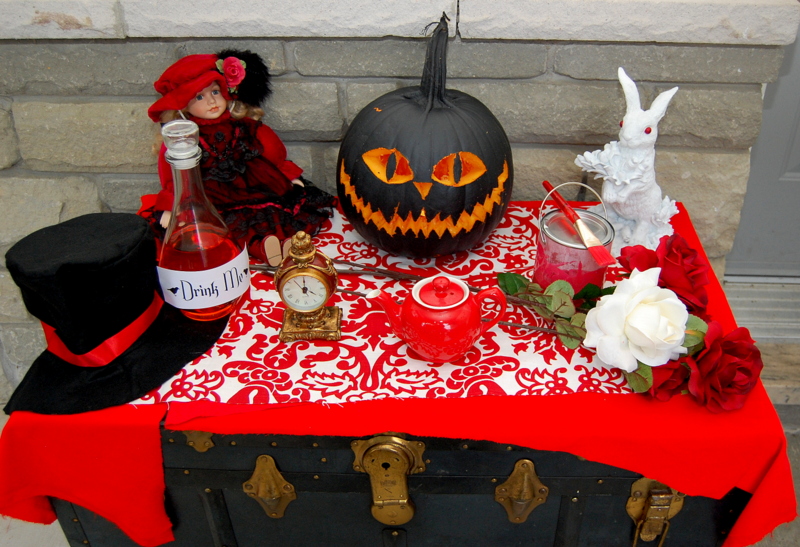 And at night we dragged out the Christmas lights and blasted a red light onto the porch. 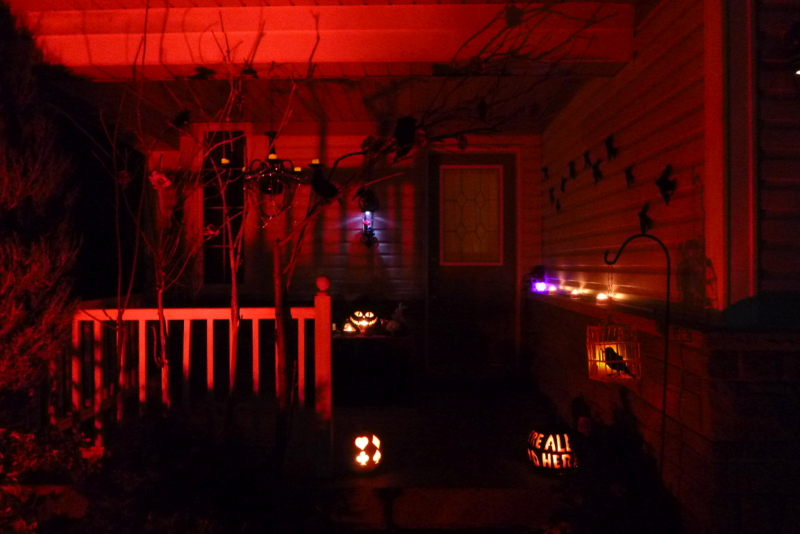 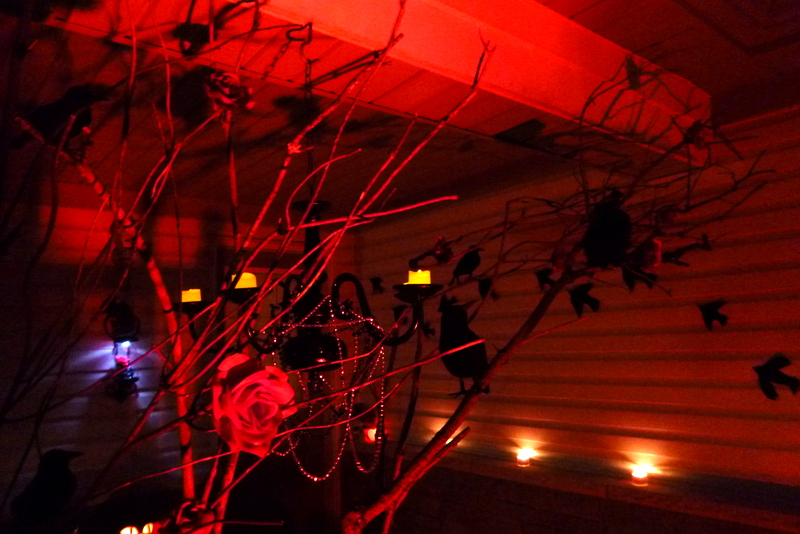 This reads We’re All Mad Here but it went all around the pumpkin so taking a photo of it was challenging. 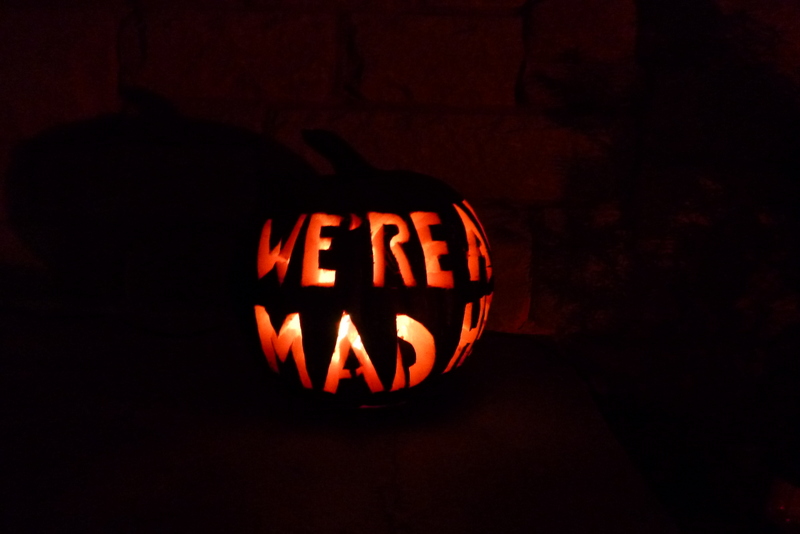 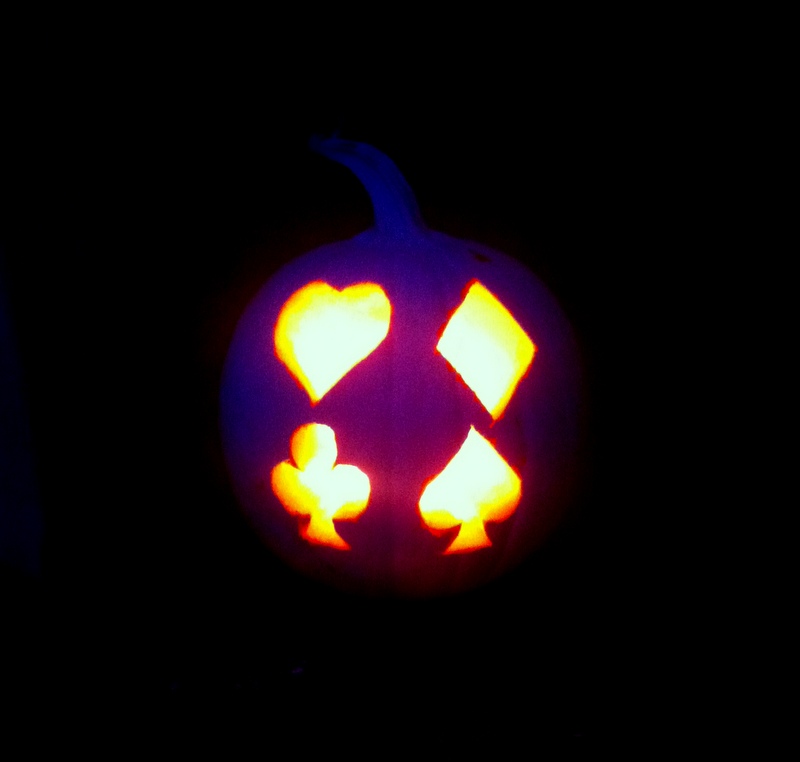 And last but not least, the characters. 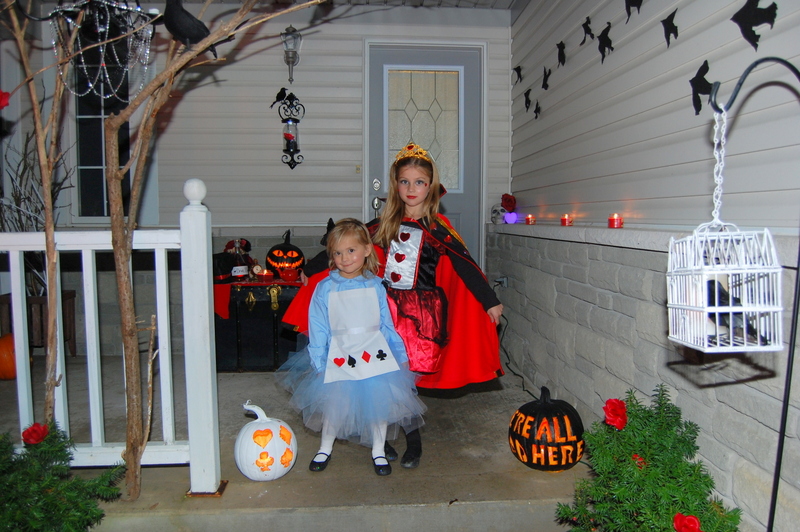 And that I’ll get into in Part 2 of our Gothic Halloween in the suburbs. 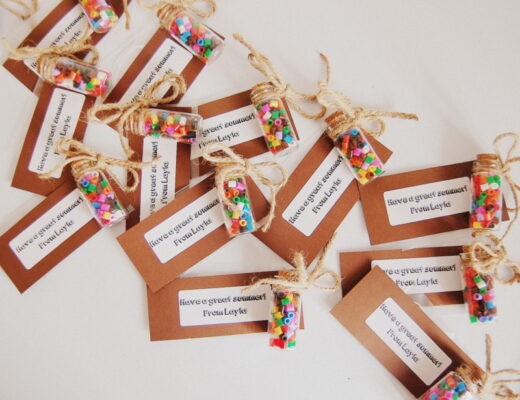 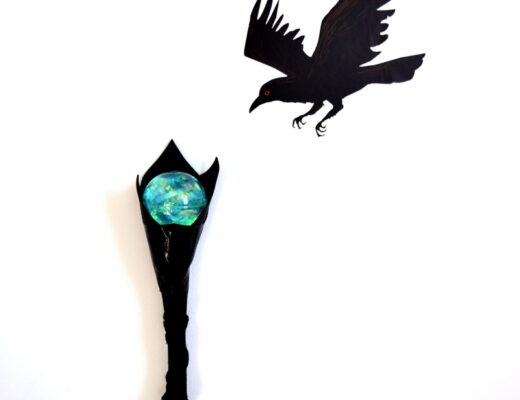 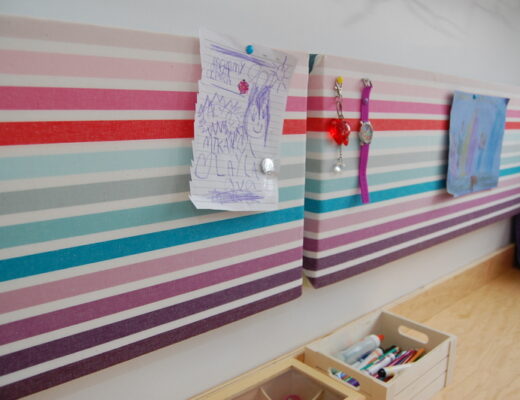 January 21, 2013
Previous Post Scary Rabbit, Tricks are for Treaters
Next Post DIY - Queen of Hearts Cape from Alice in Wonderland