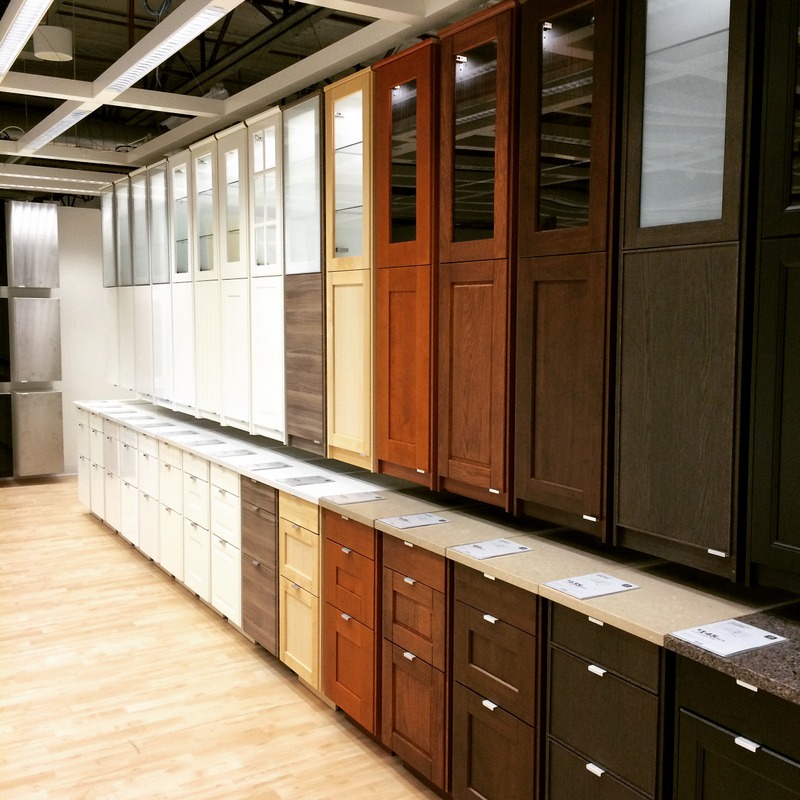 How to survive planning an IKEA Kitchen renovation – The Beginning

I had this hilarious idea that while we completely gutted and started planning our IKEA kitchen renovation this past March, that I could continue blogging as normal. I was like no problem. I’ll do some Easter crafts, maybe some Spring planter stuff and deep musings about my anger towards Target leaving Canada. But none of that happened. And now all the talented DIY bloggers that may come across this post, are going to read it and be like “Pfft. Rookie.”

Because let me tell you. Planning an IKEA Kitchen renovation is not for the faint of heart.

To everyone out there who has ever survived a home renovation of epic proportions. To all the DIY bloggers who #buildlikeagirl and make me so proud that my daughters are growing up in a time where they can choose a career in carpentry and no one will think twice about it. To all of you have planned, installed and survived an IKEA kitchen or any kitchen for that matter. To Alex and Wendy at Old Town Home who are seriously my heroes as I can’t even imagine trying to restore an 1880’s row house.

Never mind giving yourself a cookie, have you brought out the 100 year bottle of Whisky and toasted your sanity? Because seriously, you need more than a cookie as a reward for this penance you’ve undergone.

March was insane. And it made me realize why we hired a contractor to finish our basement.

But let me back up a bit to the beginning of February, where once again in the tradition of purchasing stuff from IKEA, we drove to IKEA in a snowstorm to buy our new SEKTION kitchen. We had delayed this kitchen renovation from last year after hearing about how IKEA was discontinuing their AKURUM line to the anger of lots and lots of people. Understandably so. In which case for the obvious ‘that part may be sold out and you’re screwed forever’ reasons, we waited.

We spent over 5 hours in IKEA that day. Which as much as I’d love to tell you is some sort of record, let’s be serious, if you read my blog regularly you know we are candidates for IKEA Family Live at this point and not by choice. We just can’t find anything in Canada in the modern Scandinavian home decor style that we like on an IKEA budget. Thanks again for leaving Canada Target. I’ll deal with you in another post. Thank God for thrift stores.

This is what you get when you arrive to the IKEA Kitchen area. A red carpet. Welcoming you and your credit card to butcher block counter top heaven. 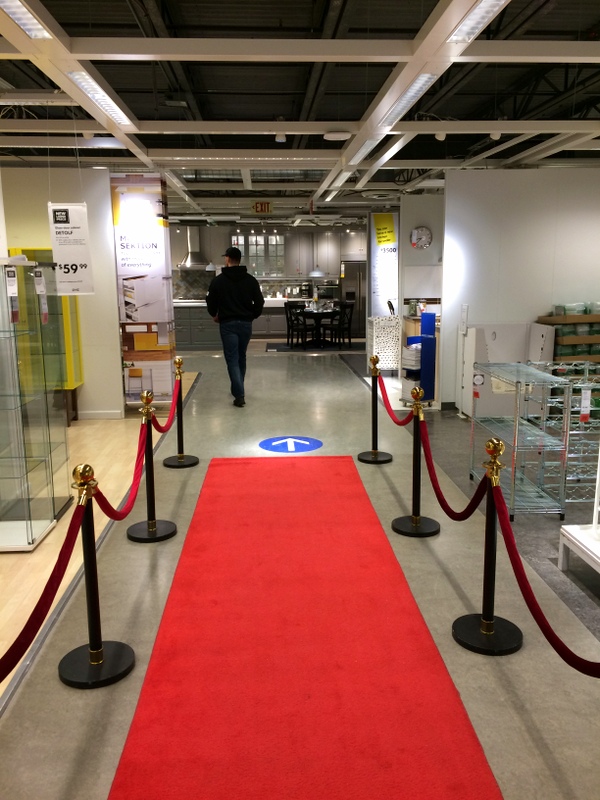 Where you get so many new choices and configurations of IKEA’s SEKTION line. 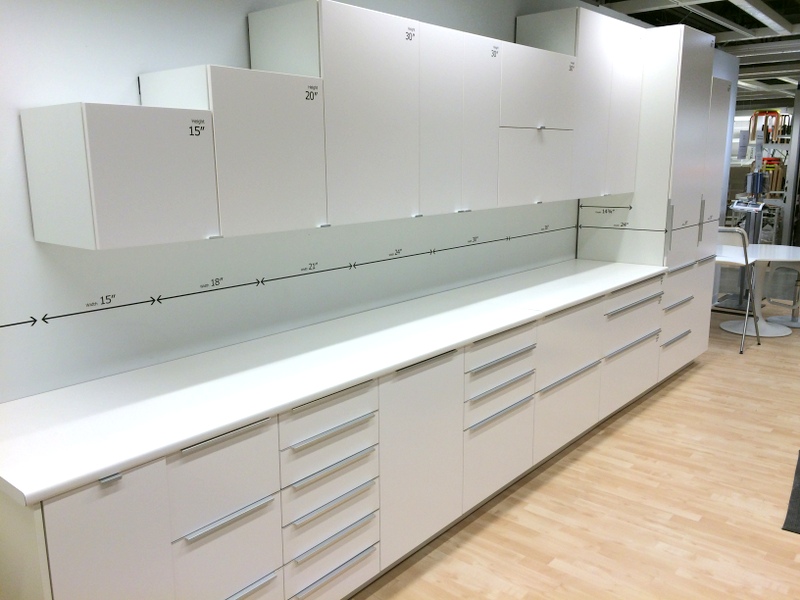 We sat down with a kitchen planner, went over our entire IKEA kitchen that we had made and saved on their Kitchen Planning program and ordered it all.

Then we waited for several hours to get our order. So why not look at all the new SEKTION kitchens and eat some Swedish meatballs in the meantime. 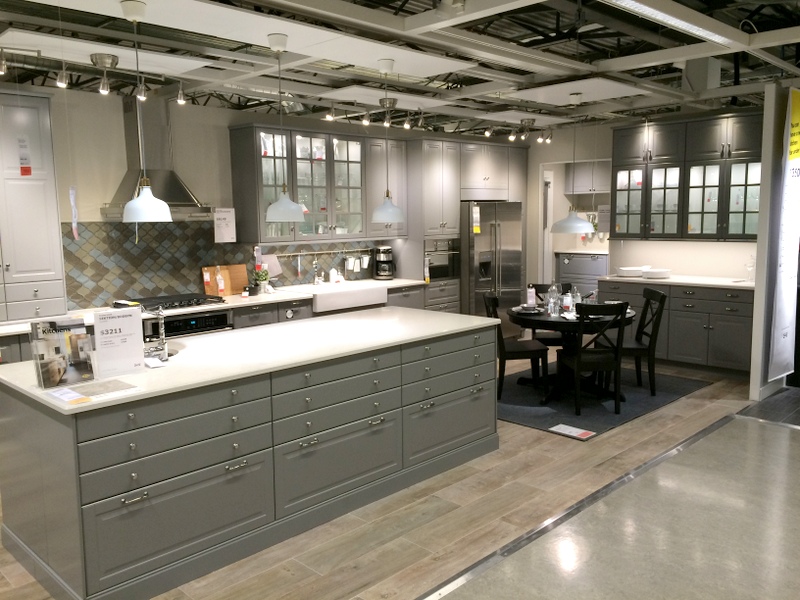 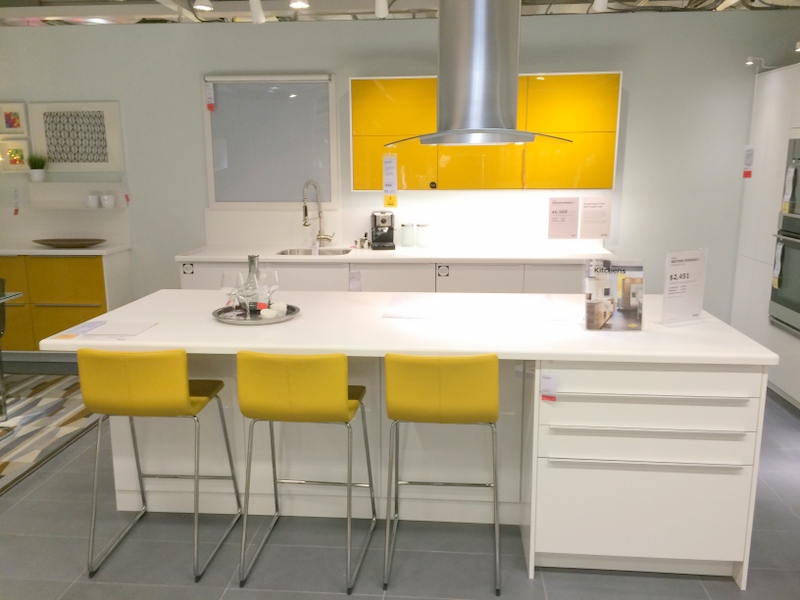 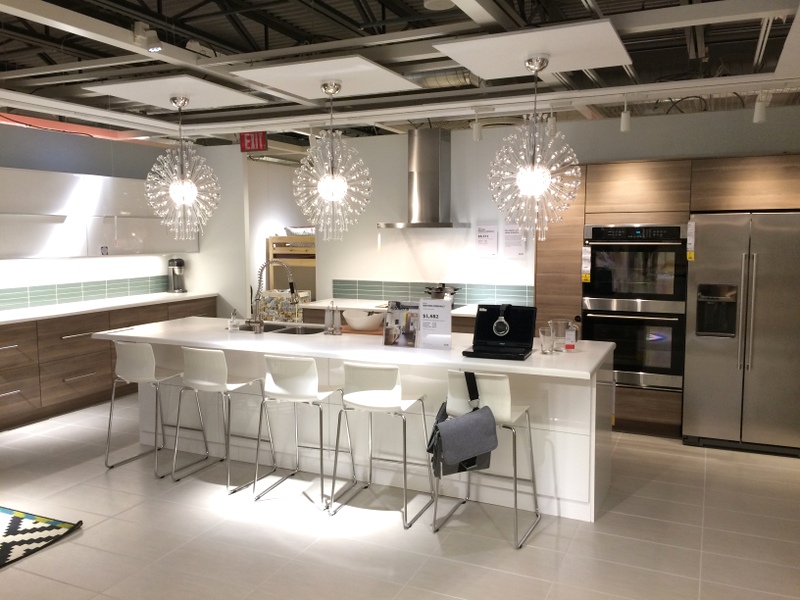 My perfect big giant one bowl sink. I am never going back to a double bowl sink again (I’ll explain that in a future post). 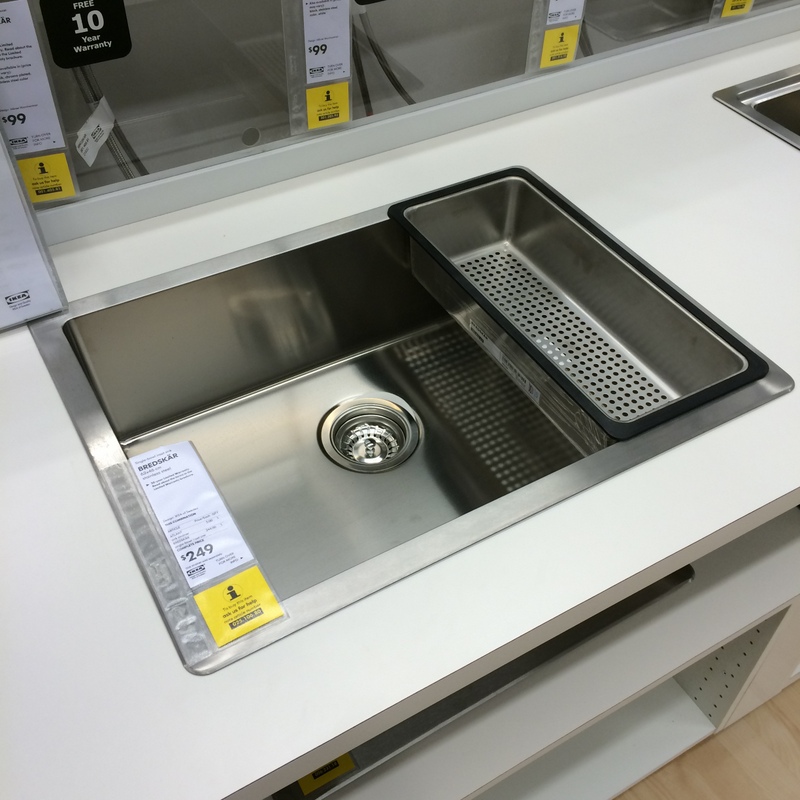 Half a day later, we get this to put in the back of our truck.

Minus the counter tops and some side panels for the fridge which had to be delivered because they’re so long. Which makes it even more comical now because we didn’t wind up using them and have to return them. Oh yeah and minus 4 prominent drawer fronts. Prominent. Which we are still waiting for since February on back order.

Yes I realize the irony of the “Need It Today?” note in the back of this photo. 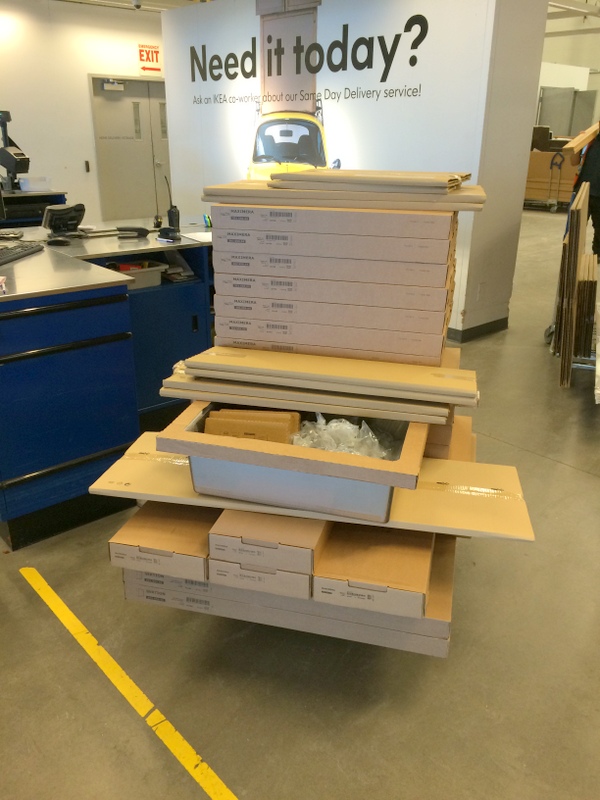 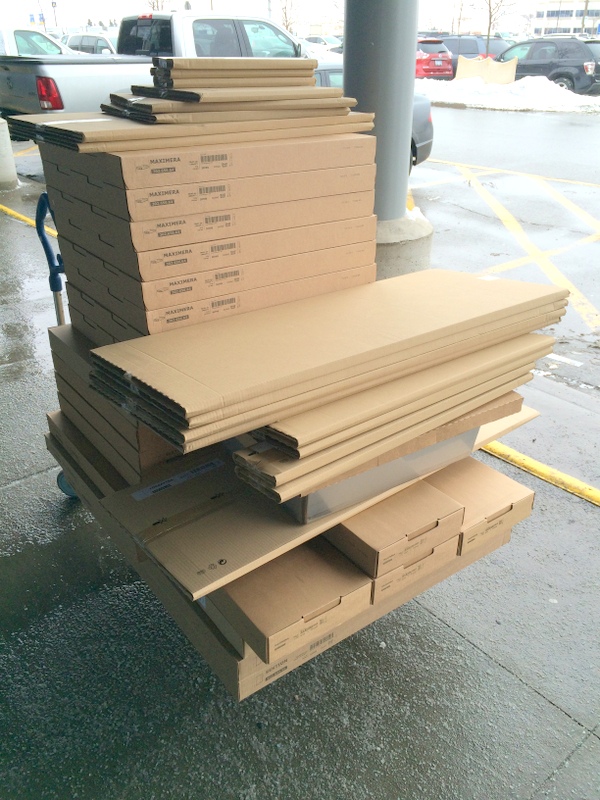 Then one Saturday morning, our very old, builder grade cracked cabinet kitchen went from this… 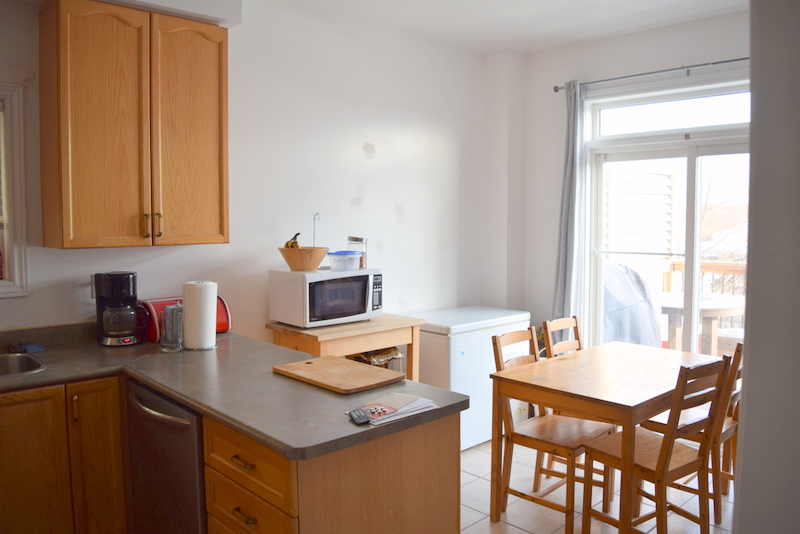 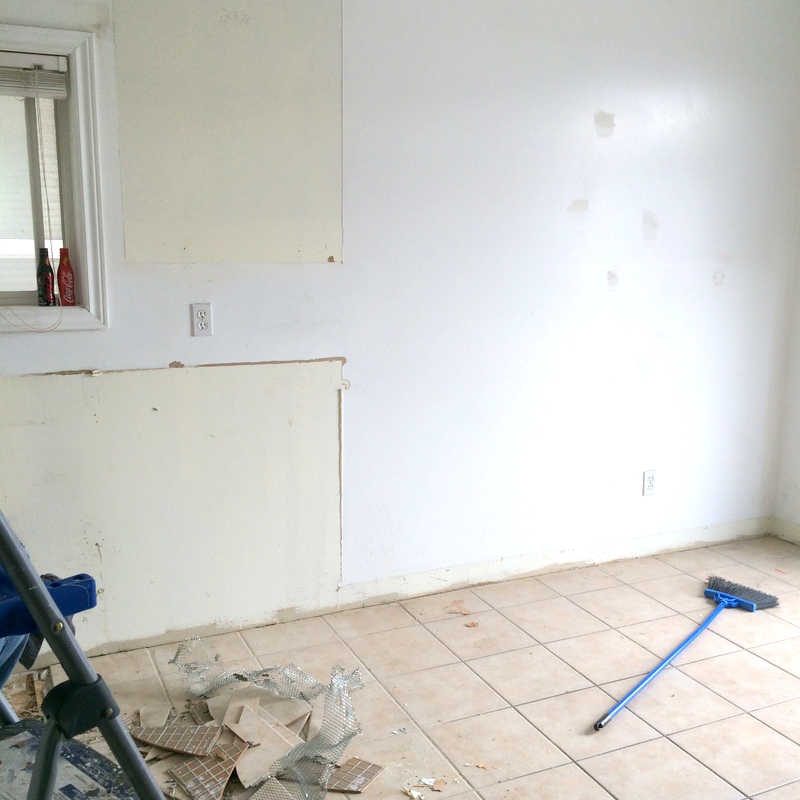 We planned for a lot with this IKEA kitchen in advance. Yet as with anyone who has gone through a major renovation, lots of things have been a learning curve. But the one thing that none of of us were prepared for was the stomach flu, which arrived the same weekend we tore apart the kitchen and pretty much knocked us on our ass. Thank you Kindergarten germs.

It’s now April and if you follow me on Instagram you know a lot of progress has been made but a ton of work still has to get done. We need a back splash tile. Shelves. A magnetic board. A kitchen table. And oh yes the back ordered drawer fronts so I can stop keeping my dishes in storage bins in our living room.

I won’t show a full Before and After on here until it’s all complete or at least makes for a good Before and After. But I will share the process of putting it together because really now, IKEA and their cartoon instructions will cause any sane person to drink. If we can help anyone out with something in advance of their attempts with the SEKTION, we will.

To give you a sneak peak, here is my BREDSKAR sink thanks to the handiwork of my brother in law Paul, who strongly agrees with me that under mount sink is the only way to go. I had a list of must have’s for this and an under mount sink was one of them. 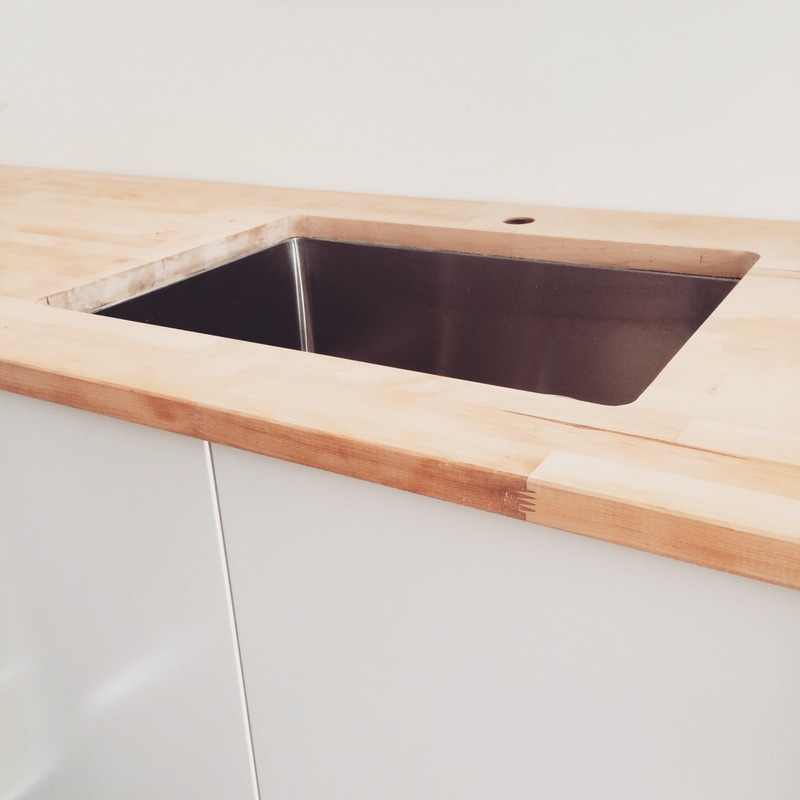 And to those of you who really want to know what it’s like to live through a kitchen reno, here’s my #keepingitreal shot of what our living room looked like for a long, long, long time. 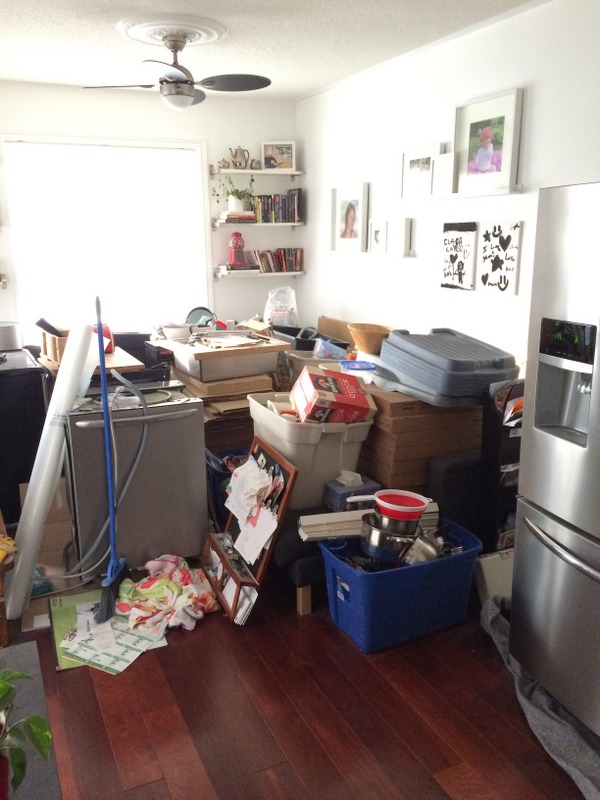 And our basement kitchen (the hacked VARDE unit) became our kitchen. 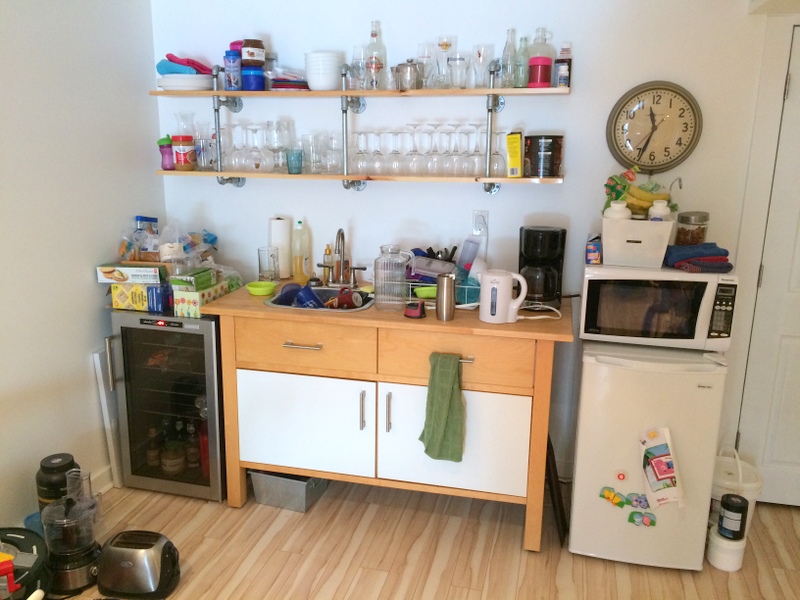 Words cannot express how much I missed my dishwasher. And yes I prepared dinner on a subfloor.

Until next time, when I discuss my science experiment that was whether or not to stain to the butcher block counter tops and how to waste unnecessary money on stain products that you don’t wind up using. Alas there are no Easter crafts this year on the blog that you can pin. I may however review all of Costco’s pre-made meals for your future kitchen renovation convenience.

Want to read about the whole process and see the Before and After?

Part 4 of the Kitchen Reno story: The IKEA SEKTION kitchen, Before and After 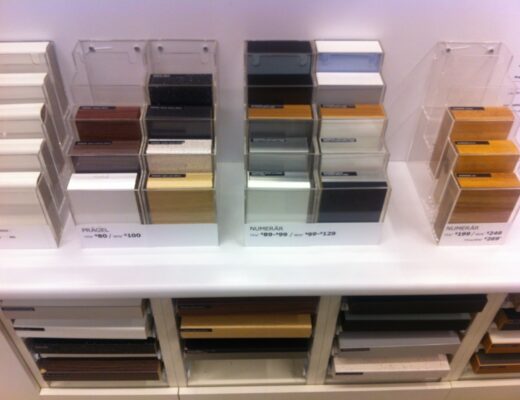 Dear IKEA, what have you done with the LAGAN? 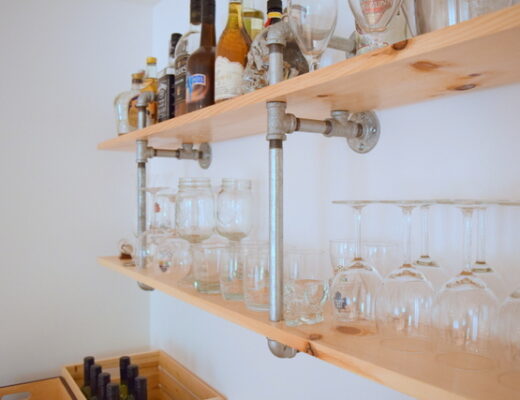 Got pipes? Build shelves. The making of a basement kitchenette/bar. Part 1. 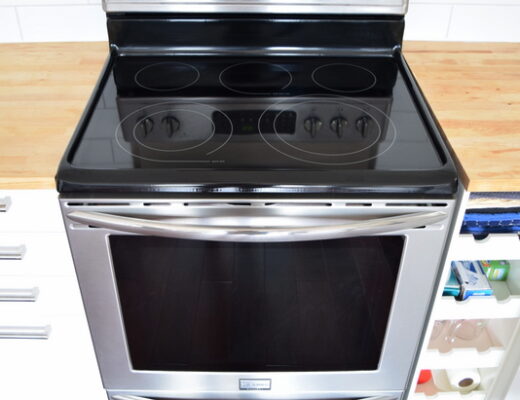 A review of my Frigidaire Gallery Electric Range

October 17, 2015
Previous Post Decorating with an Electric Fireplace
Next Post Adventures in Staining Butcher Block - What worked and what didn't