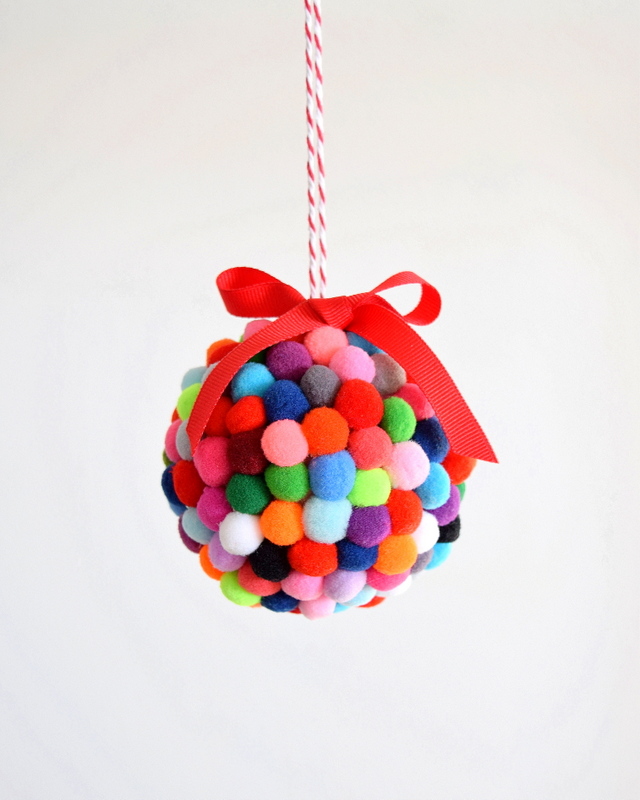 We make a lot of ornaments every year as the kids have their own Christmas tree that they go to town on and decorate however they want. It usually winds up looking like a giant ball of something two cats had a fight in, but they love it and it makes them happy so we do it.

This weekend we’re going to do our annual baking soda dough ornaments so I said let’s do another easy ornament craft for their tree. And this one started because we have about 10 million pom poms from Dollarama hanging around our home. 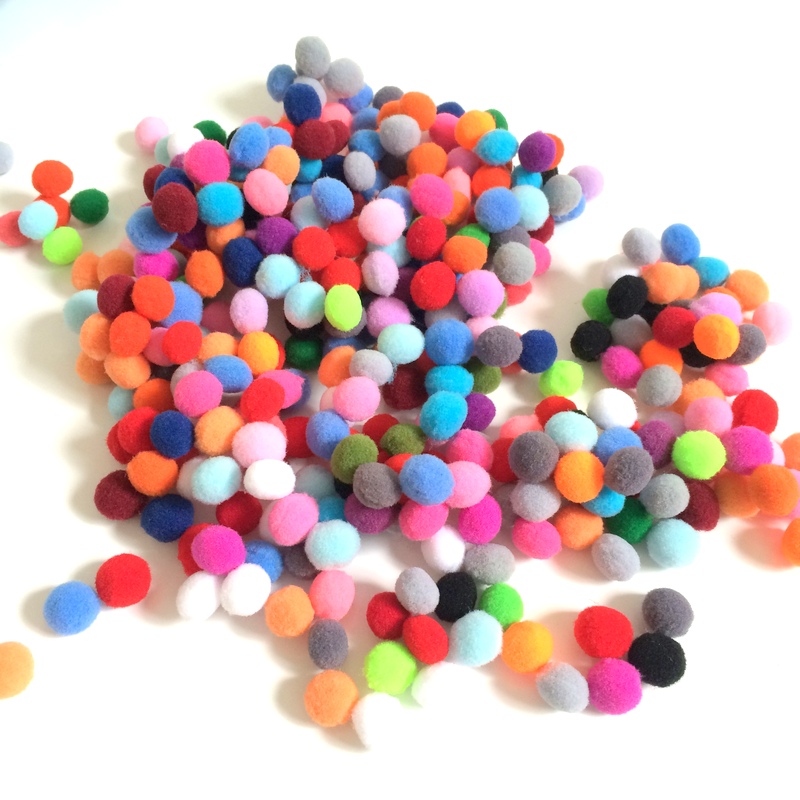 I remembered originally seeing the Pom Pom ornaments in my Pinterest feed via Meg Duersken and I thought I love this idea! Then I came across a sea Pom Pom and their cousin Felt Ball crafts including Christmas Trees from Target, Felt Ball Coasters by Inspired by Charm, Pom Pom Branches by Wayaiulandia, Pom Pom Wreath by Pickles and Pom Pom Pinecones by Dig This Chick.

So I was like Yes. Perfect. Let’s make the styrofoam balls where we pin or glue Pom Poms to them. Easy right?

This is the craft that never ends.

I got out everything. Styrofoam balls. Pins. Pom Poms. And we sat down in the evening for what I thought would be a nice ornament making time. My kids lasted maybe 15 minutes before the “This is taking forever” started. By 30 minutes of pinning pom poms, my older daughter gave up and decided to make a happy face on the styrofoam ball using the pom poms. My younger daughter flat out gave up and said and “Mommy I’m going to make an alien face with just the pins”.

I messaged photos of both to my husband late at night exhausted from picking up pom poms all over the floor. 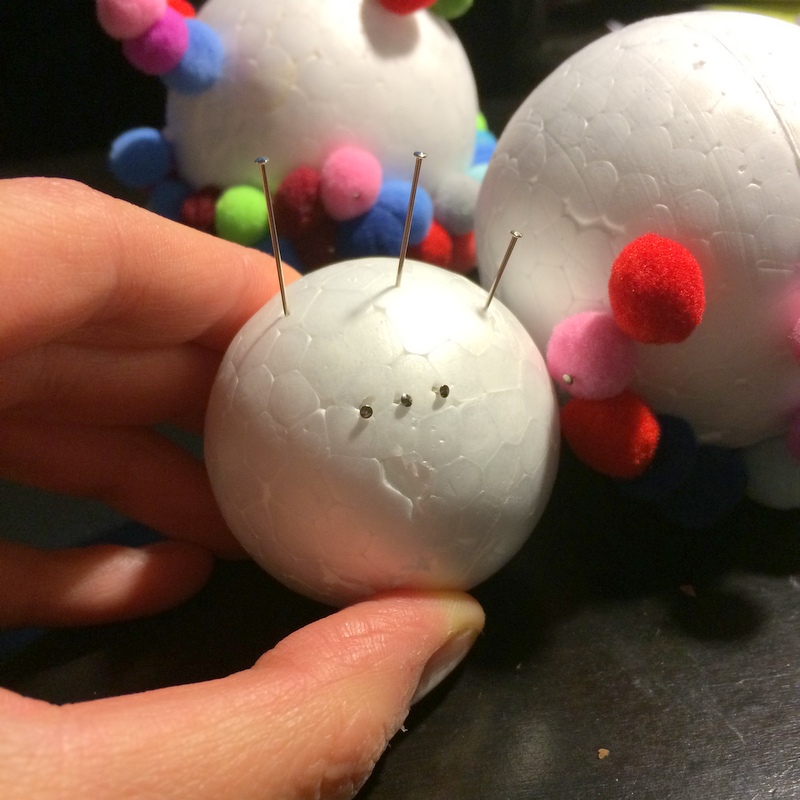 Let us remember that I have the only two kids in the world that did not like Disney World and yet continue to dress up as every Disney character they can on Halloween. They are usually the exception not the rule. So I was like this isn’t that hard, I’ll just finish some up for them.

LOL. This is what I get for choosing to do this with a glue gun instead of pins. They weren’t kidding. This took forever.

While the result it pretty great, it went like this. Dab hot glue on ball. Wipe excess strands of glue off ornament. Put on Pom Pom. Hold 5 seconds. Repeat x infinity because just when you think there is no more white space on that styrofoam ball another empty pocket that you missed placing a pom pom ball on appears. Hot glue strands everywhere.

Don’t be deceived by the cuteness. You need time to get this done. Or it could just be me. Bit tip: use a smaller styrofoam ball as this is about the size of a baseball.

In which case the next day because I am immensely stubborn, we made mini Pom Pom wreath ornaments instead and they went much faster.

All you do is take some wire, cut out a small hoop and thread your pom poms over your wire. 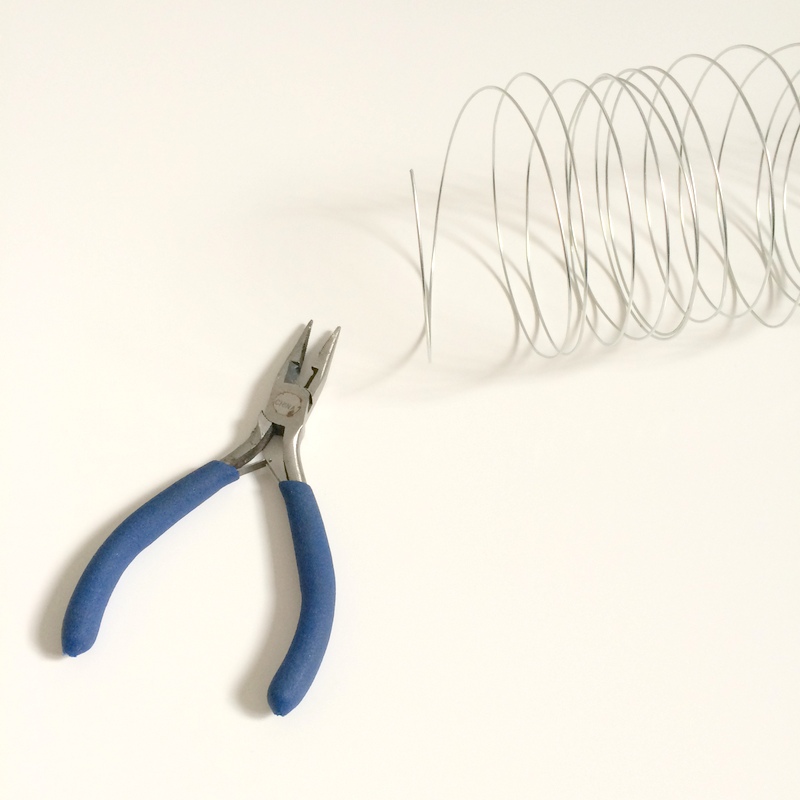 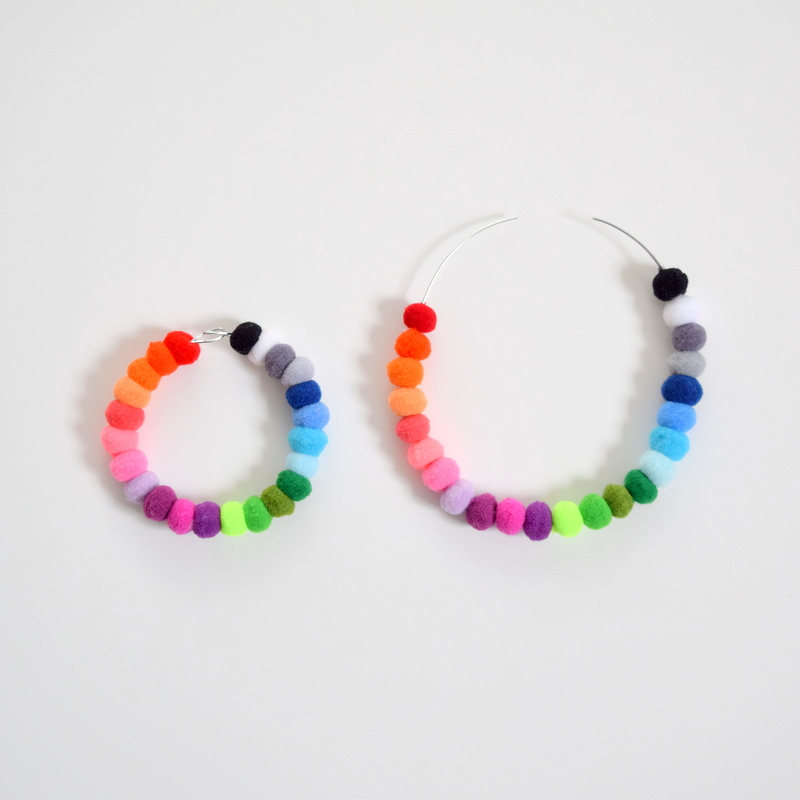 To close up the hoop, I made a loop on one side of the wire, then looped the other one through and tucked both wire ends into the top pom poms.

Then we just added a ribbon and twine to hang. 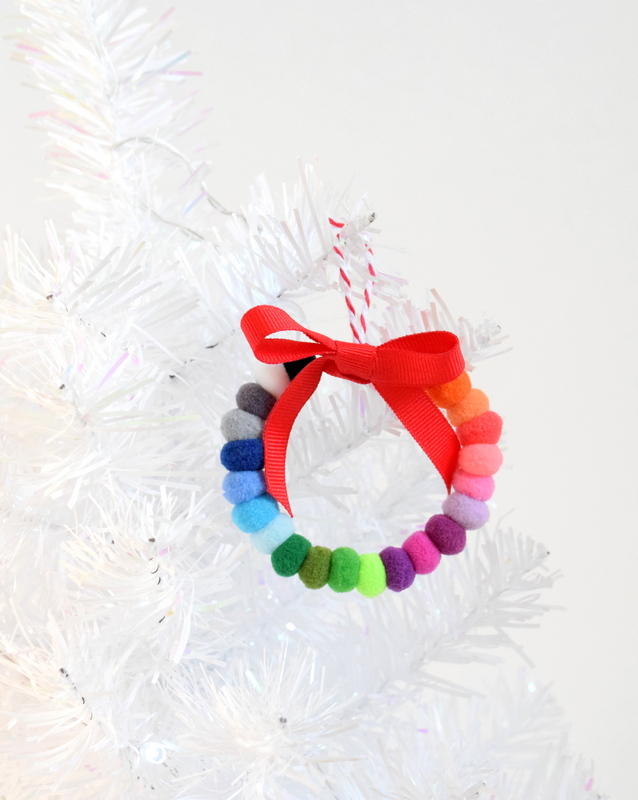 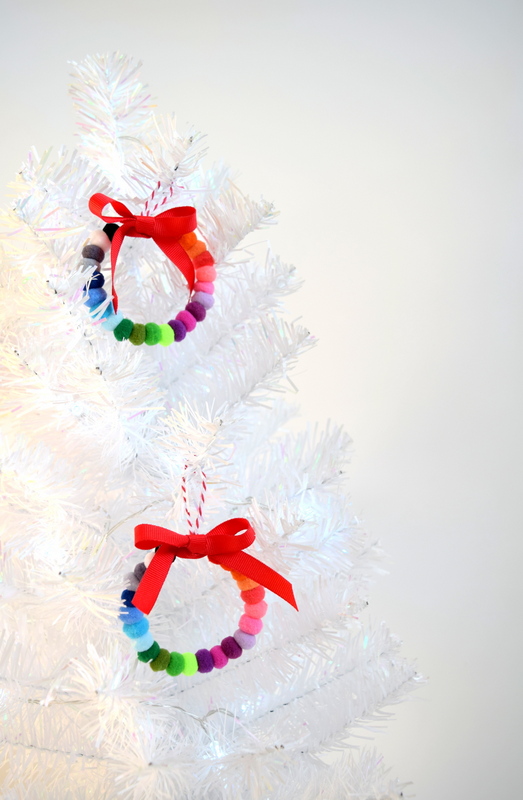 And because my kids have a better imagination (despite inheriting my impatience) than I do, they also make great bracelets. 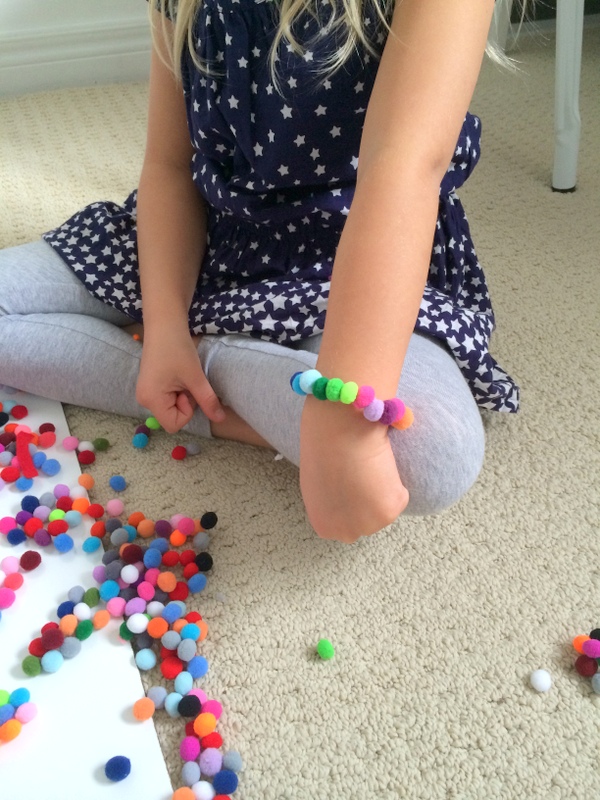 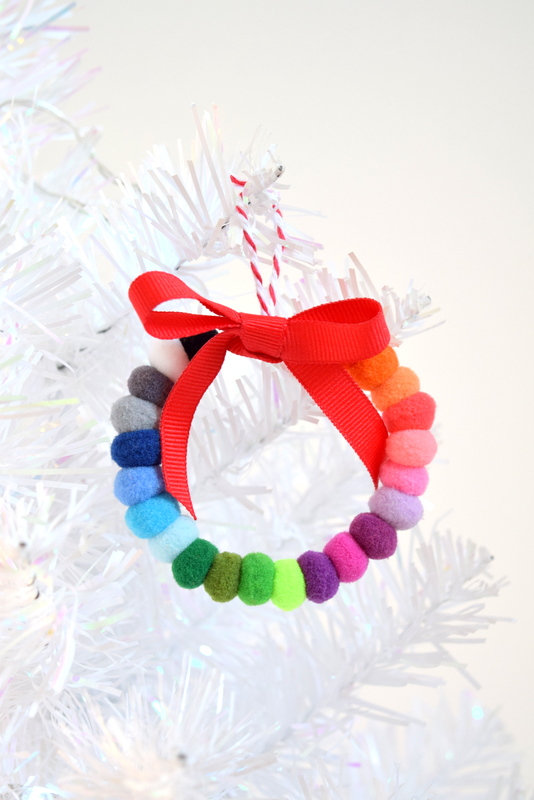 Anyone want to dare me to make these pom poms into a garland? Maybe next Christmas. And maybe I’ll buy bigger pom poms. 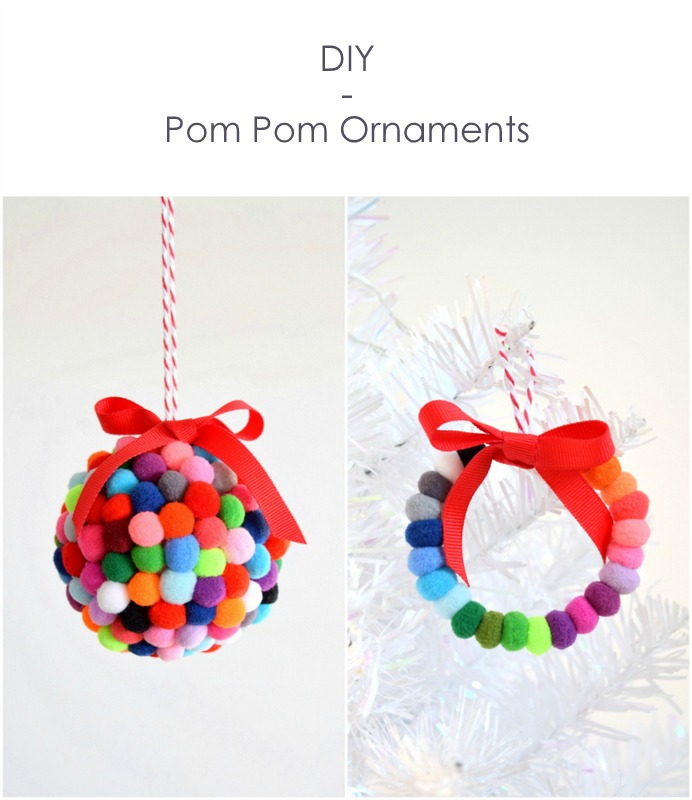 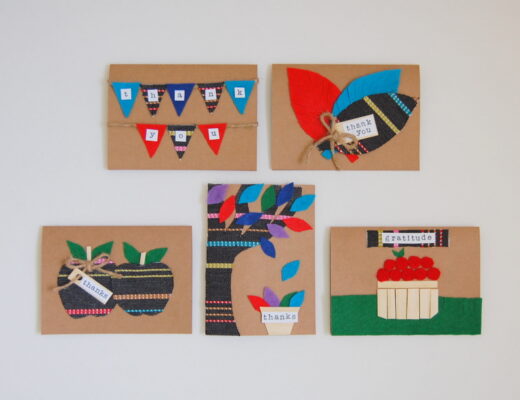 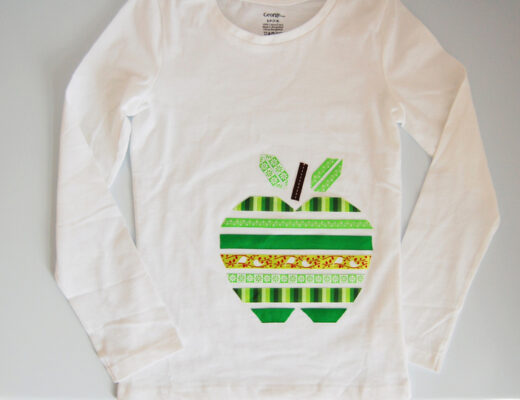